I cannot forget from where it is that I come from.

Sara has a great post about our hometown, about the realizations that you don’t make until you’re far, far removed.

Yes. There are only two-story buildings. This never occurred to me.

And it is mostly blue collar. Again, this didn’t occur to me, either. It was a given that I was going to college. But it was also a given and a non-issue that many of my classmates would go right to the farm or the foundry. No fuss about it – that’s just the deal.

On the country radio station in town, they read obituaries at 6 a.m. and noon. Trust me: when your clock radio goes off to a dark, cold Iowa winter morning and the first thing you hear is an obituary, it’s hard to get out of bed.

I could walk downtown. And the air has never smelled as sweet as those first warm spring days when the teachers make recess extra long. I’ve never seen a sky as clear as the view from my parents’ backyard.

But, like Sara, I knew I wouldn’t stay there. I make fun of my hometown, but will come to blows with an outsider who dares to do the same. And I doubt that I’ll ever move back.

Maybe we left because somewhere along the way, we were lured by the ideas of More and Different.

We read a lot of books. For a while, I fantasized about living in a boxcar, thanks to The Boxcar Children. I was in second grade and couldn’t fathom anything more glamorous.

And, we imagined. Which is a nice way to say we were suckered into small town Iowa community theatre. And we both wore body makeup in fifth grade to portray Siamese princesses in The King & I.

And because I have no shame, and because I’m feeling charitable, here’s some photographic proof. 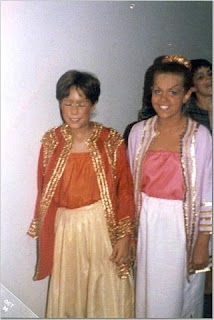 There’s no such thing as overaccessorizing.