So, it’s Wednesday, which means that it’s the traditional point of the week to start fighting the urge to cry at work.

Today is sooooo that day.

It’s 5:25 and I’ve put in a long and frustrating day. And any normal human would know that it’s now time to go home and continue the good fight in the morning.

But it just occurred to me that I don’t want to go home.

I have book club tonight, but it doesn’t start until 7. If I go home now, I’ll be faced with an hour of having to entertain myself, all alone, in my house. Just like every evening pre-Mr. Wonderful.

Now, don’t get me wrong. I like some alone time. It’s not like I’m filled with such self-loathing that I can’t stand to be alone. I’m actually pretty entertaining. And I’m not some freak in need of Ritalin who needs constant entertainment. Dance for me, boy, dance!

No. It’s that sitting alone on my couch in a dark house makes me think of this time last year, when I purposely worked late every night because I was too scared to actually, you know, have a life. Working to the point of exhaustion was so much easier. And socially acceptable.

Mr. Wonderful is a wide-open book. He’s the most emotionally available person I think I’ve ever met. Mostly, this is good. Sometimes, I think, “You’re such a girl. WTF?” But mostly it pushes me to open up the dark little creases and crevices that had started to form in my slightly under-inflated heart.

As our courtship started to get more serious, I worried that I was literally incapable of matching him – his ability to communicate about his feelings and to give a shit. I had turned very much inward, and while it was great fun to be challenged by a handsome smartass, it was quite another thing to truly let him in.

I didn’t know if I could do it. I knew I wanted to. But finally, the idea of not being able to let him in was way scarier than actually letting him in.

I still have moments of stretching, but like a yoga class, it’s all good in the end.

And if I can accept his crimson and blue heritage into my black-and-gold, ranked-number-one heart, surely that means something, right? 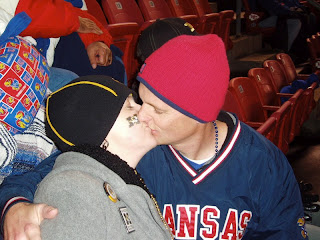 What would Nina do?

Feeling better now that I have this off my chest.