So you better treat him right.

Mr. Wonderful and I saw Bon Jovi last night. It was a great show. JBJ is a heck of a performer and almost made me forget that there was evidently no air conditioning in the arena. Because why would air circulation be important when you’re having 17,000 people over to sing and dance and drink within close proximity to each other?

The people watching was incredible. We spotted many folks reliving their younger days. We also sighted many packs of cougars. Actually, do they travel in prides? Gaggles?

Now, I was a sorority girl. I have been a girly girl. But the cougar lifestyle? It scares me. Probably because it screams of desperation. These women seem fake and uncomfortable with themselves, and I find that unsettling.

But also? Also, I see the folly in wearing four-inch heels to a concert.

However, I also see the joy in being completely comfortable in your own skin. Case in point: Mr. Wonderful.

I wrote several months ago that in preparation for the Bon Jovi show, I needed to score a Camaro and get a perm.

Mr. Wonderful tried to find a Camaro, but he ultimately settled on this Tina Turner wig paired with his circa-1993 Van Halen t-shirt. 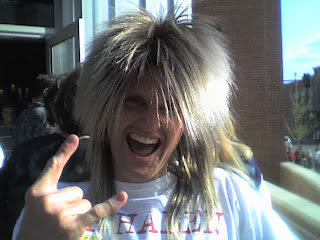 When he showed up in this get-up, I had to sit down. He wore it during our tour of bar and restaurants prior to the show, during the show, and during our let-the-garage-clear post-concert drink.

Here’s the thing about the hair: people are drawn to it. He had his photo taken by at least a dozen folks. People were high-fiving him everywhere we went. They were fascinated by the hair and asked if it was real. He was the belle of the ball, and it was a great sociological experiment.

So many people came up to us, we decided, because they assume that someone ballsy and comfortable enough to sport a Sebastian Bach-esque wig at a Bon Jovi concert is friendly. Friendly, and somebody you want to know.

Mr. Wonderful is friendly, and he is somebody you want to know. He had a great time, which delighted me. His willingness to go all out taught me yet again what it means to let go and have fun. And it made me fall in love with him just a teensy bit more.

Live blogging? This is how it’s done.

Does this make me an old lady?