My family learned some really important things this Christmas.
First of all, we’re really glad we aren’t German. Secondly, frogs are awesome.
Christmas eve, my parents, my brother and I all attended mass. Our midnight mass now starts at 5:30. Having served as an acolyte during my formative years and struggled every year to stay upright through a midnight mass, I’m sort of disappointed that the service is actually at a normal-ish time now. Back in my day …
But it gave us a chance to have a leisurely dinner after the service and to begin ingesting the four dozen Christmas cookies that we were all required to eat. This doesn’t even mention the Christmas Cracker Quota, as my mom bought crackers, lost them, bought more, and then found the original crackers. Not eating enough carbs makes baby Jesus cry.
During dinner, Poochie started telling us about different Christmas traditions. The one that really stuck with us was Krampus, a German dude who looks sort of like a devil. He comes around on December 5 and loads up all the bad children into his basket and carts them off.
If you need a visual, click here. Be warned: Krampus has horns, hoofed feet and a generally sour attitude.
So, instead of visions of sugarplums, we all went to bed worrying about Krampus.
But Christmas arrived, Krampus didn’t carry any of us off, and we had a wonderful time.
I was truly overwhelmed when we opened gifts. At Thanksgiving, we all decided to give each other just one gift and to do good deeds in lieu of an orgy of Christmas presents. We did, however, also draw names for gag gifts.
When it came time on Christmas morning to open gifts, the good deeds were first. I started crying – it was amazing. Families received Christmas gifts, winter coats, and food. A gift was given in honor of Foxie Doxie and Shih Tzu Magic, and in memory of Geriatric Poodle to an animal shelter. Food banks received a little help restocking the shelves. Salvation Army bells were rung.
It was pretty much the best Christmas ever.
And yes, it did involve a group hug.
Then, we opened the gag gifts. I received a dancing and singing Christmas frog.
He’s sporty, with a scarf, a Santa hat, and, of course, red leg warmers. He dances and ribbits along to “Stupid Cupid,” which, if I’m not mistaken, isn’t even a Christmas song. 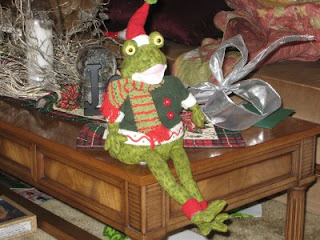 This frog is so hideous and fantastic and nightmare-inducing. Of course, we welcomed him as a new member of the family. And we named him.
Krampus the Christmas Frog.
We’ve spent the last three days cleaning out the basement, being iced in, gorging ourselves on Christmas cookies and hiding Krampus the Christmas Frog around the house.
Know that if you take a shower, you’ll most likely come out to find Krampus greeting you in the hall. Need some breakfast? Krampus has been sitting in front of the cereal allll night, just waiting to serenade you.
Poochie and I even posed for some new, Olan Mills-esque Christmas photos with Krampus. 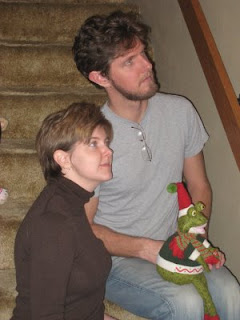