So, there are about 29 hours left in 2008, and it’s that time of year when we’re inundated with “best of” lists. Critics’ choices for books, TV, film, blah blah blah.

At some point, I totally lost track of the fifth-grade Cha Cha who listened to Casey Kasem every Sunday so that she would know what songs were popular and therefore not be a total outcast at school. No, somewhere along the way, I morphed into Cha Cha Who Doesn’t Give a Shit.

Case in point? Of the top 10 singles of the year, as named by the music critic in my city’s fair newspaper? I have heard one.

And all those movies that everyone is talking about right now? Umm, yeah.

I saw Mamma Mia twice in one afternoon! And it was great!

So, here are my choices for Cha Cha’s Stuff of 2008. Keep in mind that this is all stuff that I liked, disliked, or continued to like or dislike in 2008 – not necessarily stuff that was new to the world.

Best cable channel
TBS. Specifically, TBS on Saturday mornings. TBS can make or break my Saturday. I roll out of bed, grab some breakfast, and test the waters to see what movie is playing on TBS. A few weeks ago, it was Something’s Gotta Give, which I’ve seen, like, four times. This meant that my Saturday was shot – I watched the whole movie and eventually got dressed at 3:30. I *heart* you, TBS.

I also liked the sing-along version, but, umm? I discovered that I didn’t need the lyrics on the screen. I sort of already knew them. Because I am cool like that.

Best movie – traditional holiday fare
Always have, always will love this one. Last year’s winner, and – dare I say it – a favorite to win in 2009 as well. Trading Places. It’s just not Christmas without Eddie Murphy.

Movie that all the critics loved that left me scratching my head
Burn After Reading. Yeah, Brad Pitt was funny as a doofus. And I should act all cool like, “Wow, the Coen brothers’ movies are such a statement about our society.” But mostly? Mostly, my friend L and I were like, “Umm? What was that?” when we left the theatre. Because we are not cool. And the violence sort of creeped us out. Because we don’t go around, like, murdering people.

Favorite book – memoir
Life and Times of the Thunderbolt Kid by Bill Bryson. I love Bryson’s stories, and his audio books are a special treat – they’re like listening in on one of your dad’s buddies telling a particularly good tale. Bryson also has my undying love for noting that Jello is the state fruit of Iowa.

Favorite book – novel
Certain Girls by Jennifer Weiner. I’ve read all of Weiner’s books, and enjoyed some more than others. But this one almost made me run off the road while I listened to it. It’s a continuation of the tale started in her debut, Good in Bed. A fun read that’s a little more substantial than you might think.

Favorite book – nonfiction
Pledged: The Secret Life of Sororities by Alexandra Robbins. My book club read this and it was fascinating. As a sorority woman, I read it partly like, “Oh, yeah, I remember that” and partly like, “OMG, what were we thinking?” This book inspired a really great book club conversation about women’s organizations as a whole, too.

Best periodical to grab while headed into the bathroom
Entertainment Weekly. I somehow scored a free subscription when I ordered some concert tickets, and this magazine has been showing up in my mailbox for the last four months. I have friends who salivate over EW and look forward to its arrival. But since I am woefully not with-it about my entertainment choices, I end up reading weeks-old issues while, erm, sitting on the can. It’s a great time to reflect on the the great TV shows that I missed because it took me three weeks to get around to reading EW.

In the interest of full disclosure, I must admit that EW did alert me to the new Muppets’ Christmas special, which was wonderful. And I actually saw the special because EW talked about it three weeks early, so I read about it, like, the night before it aired.

Worst choice of reading material
A Wolf at the Table: A Memoir of My Father by Augusten Burroughs. I have read all of Burroughs’ books, from Running With Scissors to Sellevision his excellent essay collections. But this one? I hate to admit it, but … it was so self-indulgent and fake artsy that I listened to only one disk of the eight-disk audio book. Maybe I just wasn’t in the mood to hear unsure recollections of a shitty childhood. Or maybe it’s just a shitty book.

Best group of young ruffians that almost killed me and my family
The University of Missouri football team. The boys from my alma mater did their very best to lose last night’s Alamo Bowl to the Northwestern Wildcats – a very likable team. But the Tigers held on to win in overtime. My parents and I were all exhausted by this ugly game. At one point, my dad turned to me and said, “If these were the Iowa Hawkeyes, I would have had a heart attack by now.”

Worst college football coaching choice
This one’s a tie between Penn State giving 957-year-old Joe Paterno an extension and Kansas State rehiring their retired coach, Bill Snyder. Seriously? I guess folks under the age of 70 don’t understand the intricacies of college football and can’t relate to or effectively coach 18-year-olds.

Best concert
Obviously, My Boyfriend Dave Grohl. Even though his lawyers have asked me to stop calling him that. They also said something about not weeping in his driveway in the middle of the night …

Best gift
Did you even have to ask? 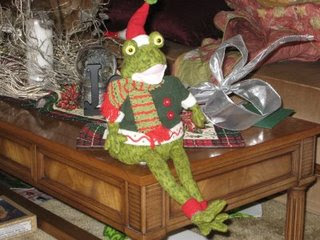 Tomorrow: Cha Cha’s Stuff of 2008: Cha Cha, This is Your Life edition!

Why HGTV doesn’t qualify as a reality channel.

Sleep and sheets and football and pottytraining.