Let’s call it compromise. It makes me feel better.

I’ve been beaten down.
I can handle the accidents. I can make peace with the poo a foot from the back door. I am one with the fact we have a way to go with crate training.
But it was the crying that really got me. The crying that morphed into a panicked, high-pitched bark every night when I put Lil’ Frankfurter into his crate and I climbed into bed. I’d linger on the edge of sleep and think, “I should really get up. I should get up and grab the old comforter out of the hall closet and just sleep on the floor next to the crate. It would calm him down. I’m sure the floor isn’t that uncomfortable. Except it’s a wood floor. Of course it’s uncomfortable. And that comforter isn’t that fluffy anymore. And exactly which closet is the comforter in, anyway? And isn’t he going to wear himself out soon?”
And so, every single night, I would have this exact inner monologue as I finally drifted off. Until two nights ago when this little dude finally broke me down. 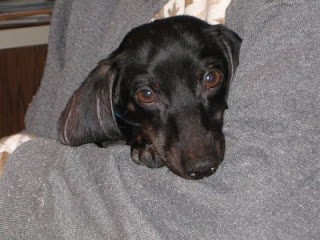 Foxie Doxie, Frankfurter and I all slept on the bed.
I told myself I wouldn’t let Frankfurter on the bed until the potty issues were completely resolved and we had established the kennel as a safe haven. But, to be honest? The two mornings he’s woken up on the bed, he’s been really mellow and hasn’t put up his usual to-the-death fight over getting in his kennel when I leave. And he hasn’t been panicked about being outside without me.
Actually, I think that last one is that he just thinks it’s funny to make me stand outside in my pajamas for all the world to see. Sort of like a few pre-Frankfurter weeks ago when Foxie Doxie cornered an opossum at 11:30 at night. I found myself outside in my pajamas, pink Disney princess flashlight in hand, trying to figure out how I was going to defend Foxie from a mean-ass varmint who was hissing at us. 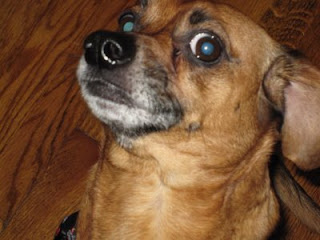 He is dedicated to defending the homestead.
I will tell you this: screaming at Foxie to “Leave it!” when he didn’t back down from the varmint only made my neighbors’ lights come on, one by one.
At least I didn’t have rollers in my hair. And I did manage to grab Foxie before the varmint gave us both rabies. So maybe I’m not totally white trash.
Let’s just not talk about the dog hair in my bed, m’kay? Thanks.
February 28, 2009 by Becky Brown
Previous Post Next Post