Mortal Kanine: The Long Paw of the Law.

We had a dog party last night. Three women, four kids, four dogs, a bottle of wine and Chinese take out. Foxie Doxie and Lil’ Frankfurter were well behaved, and Frankfurter was carried around by my 6-year-old friend, who announced that he smelled like burnt hot dogs. A good time was had by all.
Foxie and Frankfurter were exhausted after their childcare duties. So much so that they slept until 10 this morning. I was shocked and delighted.
As we all woke up, I noticed the two dogs nudging, licking and climbing over each other. They’re very comfortable together, and there’s a definite pack mentality. It’s a stark contrast to the Geriatric Poodle.
I’ve written before about the Geriatric Poodle’s rough start in life. I’ll never know his story before we found each other, but it was obvious that he had been abused. Watching Foxie and Frankfurter interact makes me think that the Geriatric Poodle’s rough start was even worse than I have ever allowed myself to think.
The Geriatric Poodle was always kind of afraid of shoes. That’s a sign he had been kicked. He never figured out how to play, which makes me think that he never had toys, never had playmates and was not engaged or encouraged. Couple that with the too-tight collar and the crushed ribs when he was rescued and you’ve got one messed up little dude. In some ways, he never learned how to be a dog. 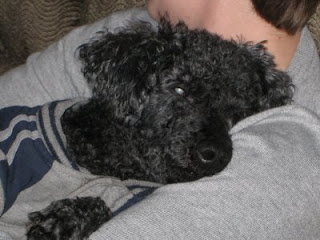 To the Geriatric Poodle’s eternal credit, he was a very loving, affectionate friend. It’s a miracle that he was able to trust after his rough start. But watching Foxie and Frankfurter – two rescue dogs – display natural tendencies that were too advanced for the Geriatric Poodle due to his abuse and neglect?
Well, it makes me want to hurt somebody.
It makes me want to find the people who hurt that tiny little dog and just beat the shit out of them.
So, maybe this is a good way to channel the anger that’s confounding me. I’m going to be a sort of veterinary mercenary, getting vengeance on behalf of mistreated animals. I will even have my own reality show – sort of a mix of Animal Cops and Dog the Bounty Hunter. We’ll take tips from viewers and travel around the country, slyly exacting revenge on cowards who hurt animals.
Foxie and Frankfurter have already signed on to be crew members, although they are both demanding producer credits as well. Now, we just need a theme song and we’re in business. All I can think of is “These boots are made for walking,” or maybe “Goodbye Earl.” Because I don’t know of any songs called “I raise my leg on your grave.” But maybe I should write one. Thoughts?
March 1, 2009 by Becky Brown
Previous Post Next Post