Cha Cha, where have you been?

So, Friday night, I succumbed to peer pressure and joined some friends at a bar. For a fake moustache party. As you do. 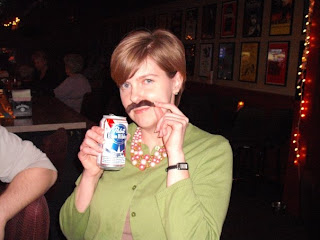 I could not keep my hands off the ‘stache. I now totally understand why guys who have facial hair often stroke it thoughtfully. I spent the entire night wanting to put my hands to my ‘stache and say things like, “Well, that was very Machiavellian of you.” Or maybe just “Git ‘r done.”
Instead, I ended up almost getting in a fight.
You see, with the fake ‘stache, one of the guys looked just like Steve Perry of Journey. And I told him so. Because that’s a compliment, and I am nothing if not kind and complimentary.
And Steve Perry Look-a-Like? Informed me that he hated Journey.
Excuse me?
So, obviously, he is dead inside. But it got me to thinking about all of the great Time-Life infomercials and vh1 shows saved on my DVR. I have a nice collection of programming featuring the likes of Journey, Kenny Loggins, Boston, REO Speedwagon and Air Supply. I watch / listen to it over and over again because it makes me happy. Because I am simple like that.
Or, rather, I had a nice collection of that programming.
It’s a dark day. My DVR died. Like, really really died. Like, the Dish Network people are sending me a new one.
Now, the new DVR is free, and the guy waived shipping because after it was clear that there was no fixing My Life Partner DVR, I started laughing hysterically, saying that first I got dumped, then my dog died, then my DVR died.
I think I scared the guy a bit.
So, I’m currently camped out on my front porch, waiting for UPS to arrive with my new DVR. And the real tragedy? All of my programming is gooooonnnnnnnnnnne. No more Dog the Bounty Hunter. No more of a year’s worth of Grey’s Anatomy. No more 40 Most Softsational Soft Rock Songs. No more WKRP in Cincinnati. Not even one episode of Millionaire Matchmaker.
And don’t even get me started on how I have to watch this week’s episode of Rock of Love Bus on live TV, at a set time, commercials and all.
My life? She is difficult.
March 9, 2009 by Becky Brown
Previous Post Next Post

My heart is two sizes too small.

In which I’m either totally hip or hopelessly out-of-touch.