I recently learned that my mom breaks out in laughter every once in a while based on something I mentioned off-hand on the phone.
You see, Lil’ Frankfurter has a touch of the OCD. Since I took away The Love Of His Life (see also: my old toothbrush), his current obsession is any tennis ball.
Lil’ Frank’s favorite “game” of rolling a tennis ball under the couch and then barking until I retrieve it is both tiresome and, at times, dangerous (see also: Lil’ Frank attempts to amputate my finger). And sometimes? Sometimes, I’m a tired old bitch and just plain old don’t want to play.
So, I figured out that if I hide the tennis balls in the refrigerator, he has no comprehension of where they went. He can’t see or smell them, so it’s like they just magically disappeared. He doesn’t even really freak out – it’s amazing!
But when I’m not being The World’s Cruelest Mama (see also: this entire blog), I realize that I should sign Lil’ Frank up for youth soccer – or at least get him a foosball table. The boy has skillz, as evidenced by his interaction with my bathroom vanity. 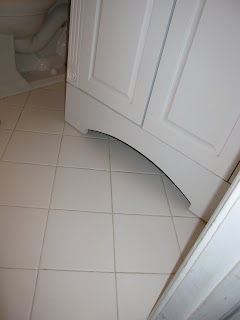 See, there’s a major design flaw with this vanity. 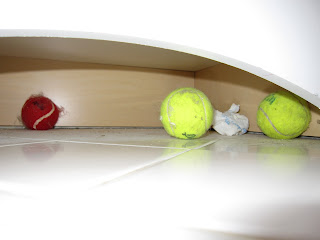 Kudos to Lil’ Frank for keeping a supply of tennis balls under there. And kudos to the contractor who installed the vanity, who left a freakin’ paper towel, figuring no one would ever know. Ahem. 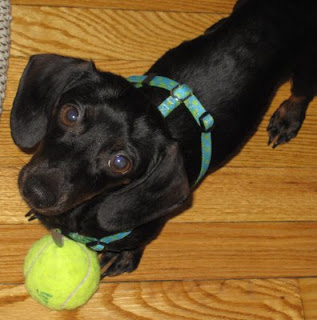 Lil’ Frank has one Life Partner, and its name is Penn. 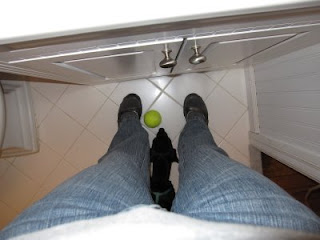 He eyes the goal. 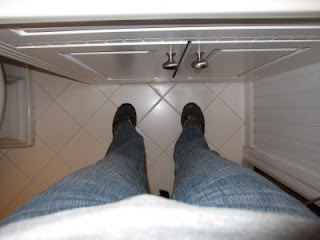 And he’s so fast with his nose nudge that he defies his mama’s amateur-at-best photographic skills. 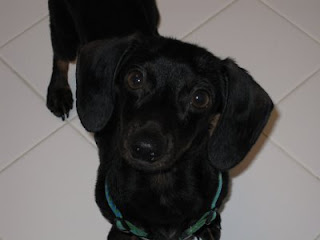 Don’t make me kill you.