In which I out myself as a giant dork.

I’ve often daydreamed about Foxie Doxie having his own public-access cable TV show. It would be called The Foxie Show and would be a Charlie Rose-esque talk show. Except Foxie would wear a beret, chain smoke, and talk about French existentialism. 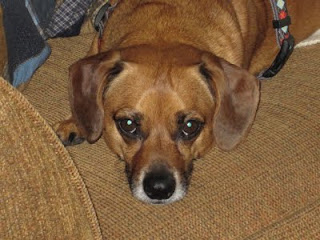 My friend G. can riff on this for hours. He does a great pissed-off Foxie French accent and will say things like, “Where is your God now, you shameless infidels?”
This? Makes me laugh and laugh and laugh.
I’ve been stressed for quite some time because Lil’ Frankfurter didn’t have his own TV show. No concept seemed like the appropriate vehicle to showcase his talents and je nais se quoi. However, the long wait is over. The answer came to me, as if in a dream.
Lil’ Frankfurter’s Good Time Variety Hour – starring Lil’ Frank! 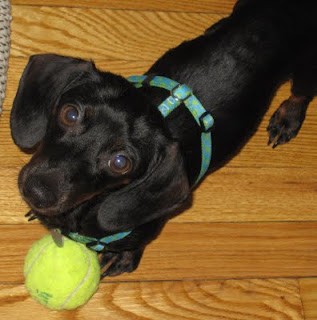 The show would feature all of the things that constitute a good time to Lil’ Frank. The basic format would look like this:
Segment 1: Lil’ Frank welcomes the live studio audience by shedding copious amounts of fur. This is also considered a take-home item, like when Oprah gives away cars.
Segment 2: Lil’ Frank licks something. This can be a person, toy, or his own paw. Because this is a variety show, the item to be licked varies. This adds to the drama and excitement of the show.
Segment 3: Lil’ Frank’s dance of destruction. This is when our charismatic host runs laps around the house. Get out of the way and enjoy.
Segment 4: Lil’ Frank licks a celebrity guest. Because humans are on this planet to do nothing but open stuff and act as human salt licks, Lil’ Frank welcomes a guest every week. Instead of hard-hitting journalistic interviews, Lil’ Frank gets to know his guest via licking. The audience will be enraptured by the grunts of satisfaction coming from America’s newest doxie TV host. Celebrity guests scheduled to appear include Dog the Bounty Hunter, German chancellor Angela Merkel, and Andy Dick.
Segment 5: Lil’ Frank makes a nontraditional lifestyle choice. Every episode, this choice is always urinating in the house and then running away. Later, Lil’ Frank innocently sidles up to his mama as she cleans up his mess and wonders what she is doing. He then gives the audience one of his famous “Humans! What is their deal?” head tilts. 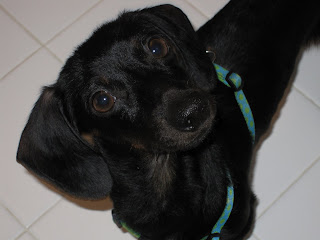 Segment 6: Lil’ Frank destroys some shit. In the finale of every episode, our fearless doxie host takes on a plush toy and rips it to shreds. One lucky audience member then gets to play “Throw my toy, you useless human” while Lil’ Frank’s high-pitched bark deafens all within a two-mile radius of the studio. This intense action continues as the credits roll. 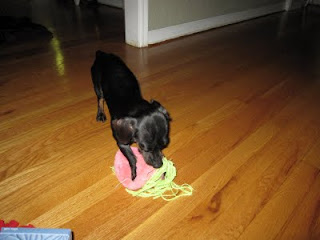 Outing myself as a giant bitch.