When I first met Foxie Doxie, he was being fostered by some friends. They were having a party, and Foxie got overwhelmed by the six whole people in the room – so he retreated. He took a nap between the wall and the back of the couch.
My sweet Foxie is a gentle soul. I’m coming to appreciate more and more how depressed he was after Geriatric Poodle died. And the last two days? Well, he’s been more sensitive than usual.
Lil’ Frankfurter was home last night, then spent today back at the vet getting IV fluids. More on him in a moment.
But Foxie Doxie?
Well, Foxie has spent the last three days literally hiding under the covers. My bed is a disaster area in general, since I’ve cloaked it in my oldest, shabbiest linens in case of further vomit, blood, what have you. But Foxie doesn’t seem to mind – he’s literally willing the world to go away because gosh darn it, he just can’t handle it.
Dude. I am so there.
I am exhausted. I appreciate that I got about five hours of sleep across Monday and Tuesday. But how can I still feel like I got hit by a car?
Oh, yeah. The stress. The worry. The mixed emotions of desperately wanting Lil’ Frank to be ok / worrying about what I’m supposed to do next for Lil’ Frank / wanting to strangle Lil’ Frank with my bare hands for running up $2,100 in vet bills. Yes, that’s $262.50 per pound of dachshund.
So, Foxie? Make room. I want to bury my head, too.

Except … isn’t this the most pathetic, precious thing you’ve ever seen, ever? 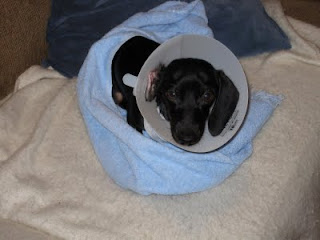 The paparazzi? So annoying. 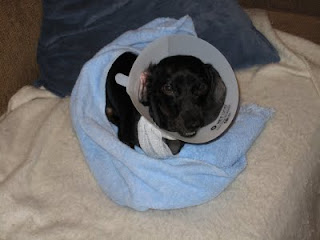 A conversation with Mr. eHarmony.

I am the worst daughter ever – but a great employee