I finally got home Thursday night / Friday morning at about 2:30. Good times.
After several delays, the gods of the Milwaukee airport (that’s General Mitchell International Airport to you) announced that our plane had arrived and we would begin boarding soon.
We all approached the gate.
And we waited. And waited. And then, the gate attendant announced that there wasn’t anything serious going on, but we were waiting on lav service.
Lav service? There was a problem with one of the restrooms on the plane.
At this point, it was after midnight. The general consensus was that we would all promise not to use that bathroom if we could just get on the fucking plane and get home.
I am not ashamed to admit that I became delirious. I looked around the almost-empty terminal, at the cleaning crew and my fellow disgruntled travelers. And then?
Then, I noticed the walls.
Remember that scene in Coming to America when the Soul Glo family gets up off the couch and leaves greasy residue? 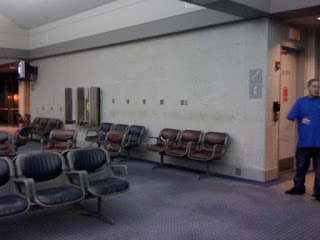 So, I got all my coworkers singing the Soul Glo theme song (don’t pretend you don’t know it – Just let your Soul Glo! Feelin’ oh so silky smooth! Just let it shiiiiine!).
And then we got on the plane. And then we got home. And then I collapsed and have been sleeping a lot.
I did realize, however, that I failed to mention one other important takeaway from my travels: I learned that one of my coworkers carries his Blackberry around in a Ziploc baggie. Always.
Maybe he stands out in the rain a lot. I don’t know.
November 15, 2009 by Becky Brown
Previous Post Next Post

My dad is the smartest man in the world.