Please tell me that I’m not the only person who spent their New Year’s Day eating Triscuits and watching Bravo’s The Biggest Loser marathon.
Anyone?
Oh-kay, then.
Wretched Cold is totally rocking the casbah. Today, I managed to take a shower and put on a bra. Yesterday? My biggest accomplishment was brushing my teeth and putting on clean jammies before My Guy came over. He brought milk, bread, my favorite Dannon coffee-flavored yogurt, and two varieties of Kleenex. And later, he went out and bought me the ultimate “I’ve given up and now admit that I’m totally sick” gear: ginger ale and Vicks Vaporub.
Honestly? It was pretty much the best New Year’s Eve. As he walked in with his Walgreens bounty, I told My Guy, “This is my Valentine’s Day. Thank you for loving me so much.”
And because he is brilliant, he just looked at me and said, “Well, would you let me know when you think your birthday is, then? Because obviously our calendars are not in sync.”
Bwah ha ha!
So, interesting stuff I’m hacking up and over-the-counter pharmaceuticals aside, let’s take a look back at Cha Cha’s 2009.
Best adventure
I don’t know if sitting on your ass can be considered an adventure, but spending a week at a really nice hotel on a really nice beach with my really nice mom was really, really awesome. I highly recommend it.
Best family addition / cause of outrageous and unexpected bills
Oh, Lil’ Frankfurter. Your listing on Petfinder called you shy and submissive … obviously, whoever wrote that never met you. I’d sue them for false advertising, except that I’m too busy trying to sell a kidney to pay for your veterinary mishaps. And adoring you endlessly. 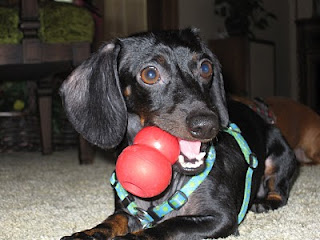 Best tender-hearted mainstay
The pillar of the pack: Foxie Doxie. I found you today, curled up on the bed with a wrapped chocolate next to you. You hadn’t opened it, but you were ashamed and didn’t understand why I laughed when took the prize away. I love you every day, even when you rub your arse on my arm. Which is quite often. I guess you’re marking me as yours. 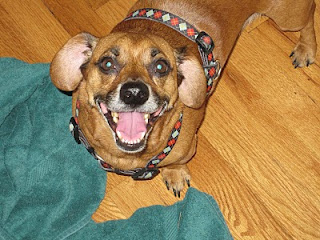 Best $5 spent all year
Was there ever any doubt? 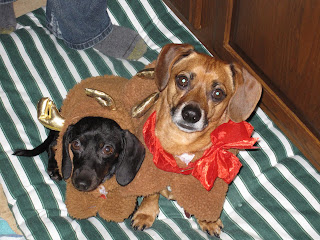 No.
Most awesomest thing that made me cry
Hearing on Christmas morning all of the amazing things my family did to celebrate the season. Families were adopted. Food pantries were restocked. Winter coats were purchased. Animal shelters were supported. Salvation Army bells were rung. And I fell in love with my family all over again.
Best gift
This is something I am still in the process of giving myself. It’s the freedom to love, and to allow myself to be loved in return. And it’s letting go of the past – forgiving but still remembering what I learned. Obviously, one is a work in progress, and I’m OK with that.
Best discovery
I make a pretty damn good bloody mary. Obviously, this is a life skill that will serve me well in the coming years.
My Guy asked me last night if I had any resolutions for 2010, but that was right about the time the NyQuil kicked in. Stay tuned … we’ll explore the possibilities tomorrow with Cha Cha’s Stuff of 2010: What’s Your Deal?
January 1, 2010 by Becky Brown
Previous Post Next Post

And then he left a note in my locker. OMG!

An open letter to The Office Overtalker