School was OK, but when I came home after school, I distinctly remember walking into my parents’ bedroom, where the rest of my family was solemnly watching the evening news. Sammy Davis, Jr., had died. And so had Jim Henson.

I locked myself in the bathroom and cried.

But it turns out I wasn’t alone in my grief for this stranger who seemed like a member of my family. I kind of knew that at the time, but it’s been illuminated for me, thanks to a new book.

I just finished listening to the best audio book. And yes, I’m trying really, really hard to stop referring to them as “books on tape.”

The audio book? Street Gang. It’s the story of your favorite show and mine, Sesame Street. And the audio book (see, I did it again!)? Read by Caroll Spinney. Yep – Big Bird himself.

I was born about five years after the show debuted, and it was such a huge part of my childhood. My mom reports that one day, she overheard me reciting the alphabet – thanks to the show, I thought it was just another song, not a major developmental milestone.

But it was a big deal – like the show getting off the ground in the first place. Street Gang goes into detail about how the show came to be, and I learned a lot. It’s also funny to think that it was so revolutionary. To me, it was just my favorite show.

I was occasionally thrown by the familiar voice reading the text – Spinney’s voice will always be Big Bird to me, even though his natural speaking voice isn’t quite the same. Hearing him read text about himself was a trip. Hearing him choke up reading about Jim Henson’s sudden death about made me need to pull off the road.

But I also learned about the backgrounds of the humans on Sesame Street, and how the Muppets came to be. The book also covered the aftermath of Henson’s death and that crazy “Oh, there’s this whole other neighborhood around the corner!” thing that was adopted and ultimately abandoned in the late 90s.

I will be honest: I can only handle so much of Elmo’s high-pitched squawk. But Street Gang made me remember all sorts of things that brought me joy. One-two-three-FOUR-five-six-seven-eight-NINE-ten-eleven-twelve!

I love this song. I’m proud to report that courtesy of my old Sesame Street record, I know all the words. Maybe this explains my love of thrifting and flea marketing.

This one was on my record, too. It made me feel crazy smart.

And who doesn’t love a good play on Billie Holiday? I had this album, too. 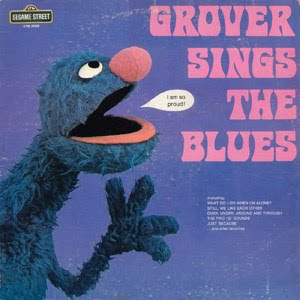 And no, I’m not a paid spokesmodel. I just loved this book and it made me happy – and made me think of happy times. Big Bird was my favorite character and for my fourth birthday, my mom painstakingly decorated a cake that looked like a giant Big Bird head.

What are your favorite Sesame Street memories?

Oh, dear. I’ve cut the dickens out of my hand.