Because I can’t blog about anything but boobs.

Guess what I did last week?

I bought a wedding dress.

Yep. It was sort of crazy. My mom came down and we visited three bridal salons. It took until about the middle of our visit to the second salon for us to get over the “OMG, Cha Cha’s in a wedding dress and is going to get married!” shock. I just kept saying, “I’m getting married!” And my mom just kept crying.

No one tells you this, but trying on wedding dresses is exhausting. I mean, it’s not just that you want to look good – it’s that this is the most-photographed ensemble you will ever wear. And you’re supposed to have been planning this ensemble since you were 3 years old and wearing slips on your head, pretending they’re veils. Nevermind the fact that these gowns are also truly marvels of engineering, tend to be heavy, and make you sort of wish for your pajamas.

But we found a dress. I didn’t know at first sight – in fact, we left the salon, had lunch, went to another salon, had a mental breakdown over the third salon’s 18-year-old consultant who kept bringing me stuff that I had already said I didn’t like, and then returned to the second salon to order The Dress.

And it’s a surprise. However, this is my artistic interpretation of the gown. 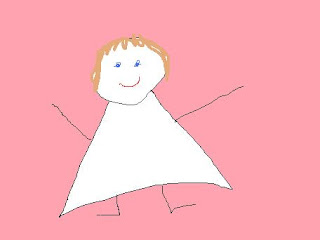 Yes, there’s a reason why I’m a writer and not a visual artist. Whatevs.

So, I’m excited. But the real story with the wedding gown shopping?

My mom insisted that I have a strapless bra to wear dress shopping. This was the staple that was missing from my lingerie wardrobe … mostly because strapless bras are the boob-management equivalent of driving on ice. No control!

But I saw the rationale of my mama’s stance, so before any of the dress-shopping shenanigans, we headed to Nordstrom to get the girls fitted for a strapless bra.

Now, longtime readers might remember my love affair with the Nordstrom lingerie department and my shocking realization three years ago that I was wearing totally the wrong size bra. Like, really, really the wrong size. I shelled out some serious dinero for some seriously nice bras. Nice bras that are now starting to feel a little … umm … past their prime.

On our quest for the strapless bra, I figured out why.

Those poor bras have been working overtime. In the last three years, I have gone up TWO CUP SIZES.

I have not been pregnant. I have not gained a ton of weight. I haven’t been taking any weird drugs or been doing that “we must increase our bust” exercise from “Are you there, God? It’s me, Margaret.” Evidently, I’ve just been sitting around, quietly turning into Dolly Parton.

And when I told My Guy? He high-fived me and smiled sheepishly. “Well done,” he said. “Well done.”

*And, for the record? If you need a strapless bra, go to Nordies. I wore that strapless bra all day and never fell out once! It was a marvel of modern engineering!

My mom is brilliant.

In which I laugh hysterically.