Did I mention? I can’t wait for your show?

I’m watching vh1’s 100 Top Songs of the 90s. This means several things.
1. I cannot turn away from vh1 countdown shows, no matter how many times I have seen them. Case in point: my recent viewing – not once, but twice – of vh1’s Top 100 Artists of All Time. I believe you will join me in my utter disgust that Buddy Holly was omitted from this list. And Journey? Only number 96? Seriously?
2. I am … a bit of a has-been. I graduated from high school and college in the 90s, and I’m just now coming to realize that holy crap, so much of our music sucked serious ass. And on what planet is a bodysuit and a flannel shirt considered proper “going out” wear? Oh, right – Planet 1995. I knew you well.
Actually, it’s sort of like someone I used to know lived in the 90s. Certainly not me. This is also how I felt about that person I used to be who had an escape plan to lock herself in the bathroom and jump down the laundry shoot to escape an unpredictable boyfriend. It’s so ridiculous – I don’t know that person any more. Like I also don’t know the person who, at 110 pounds, wore XXL sweatshirts with leggings and ankle boots.
*shiver*
3. Because vh1 is vh1, every single commercial break has alerted me to big, big news. Bret Michaels: Life as I Know It premieres Monday, Oct. 18! Set your DVRs now. But, actually, it’s easy to remember, because Bret’s show premieres the day after my big premiere as an ordained woman of the cloth at Poochie’s wedding.
Yep. You’re welcome for that handy mental crutch. It’s like a traditional mnemonic, but better. It’s all “every rose has its mnemonic” mnemonic.
So, Bret. 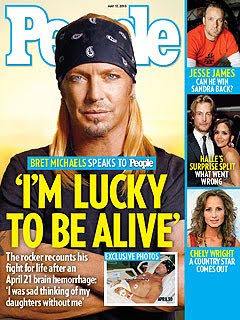 You’re awesome.
And I can’t wait for your show.
And I will totally be wearing my t-shirt. 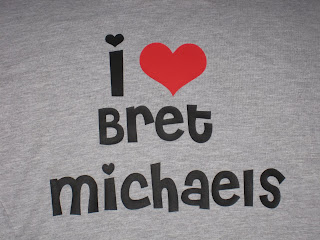 And even though I’m super excited to be marrying My Guy? He understands about you. About us.
So much so that when I saw these engagement photos that were crashed by none other than The Boss, and I demanded that My Guy and I have the same Springsteentastic engagement photos?
My Guy sighed and said, “Well, I had Bret Michaels lined up for our engagement shoot, but I guess I’ll cancel …”
So, can’t wait for your show, Bret.
September 30, 2010 by Becky Brown
Previous Post Next Post

Let’s hear it for the boy!

Step away from the egg nog.

An open letter to the good people of Mattel.