After getting home from a snowy and festive Christmas in Iowa, My Guy and I consolidated canine households. All four dogs are currently staying at my house. The labradoodles are surprisingly mellow, although they keep sliding around on the wood floors.
There is one slight issue, however. Lady Doodle has a bit of a nervous digestive system. She has, umm, diarrhea. But! Because she’s such a smart and good dog? She hasn’t had any accidents in the house.
She has, however, had the worst gas imaginable. Like, the entire house smells like farts. Toxic dog farts.
I’ve sprayed organic oils throughout the house. Candles are burning. But, if we’re honest? My house smells like shit.
So, it was only reasonable that this afternoon, the poo stink was so bad that I walked around looking for the doo. And then I realized that somebody had tracked clumps of dirt onto the couch. And then I realized that those clumps weren’t dirt.
Ahem.
Foxie Doxie had stepped squarely in a big ol’ pile in the yard, then tracked it throughout the house.
We had an emergency bath. I washed three pillow covers and scoured the couch. I washed the floor. I cleaned the kitchen since the emergency bath was in the kitchen sink. And then I threw myself into the car and ran out … to close on our new house!
Yes. My guy signed our lives away today. And they gave us keys! To our house!
We took pictures of every room.
We decided we’re morons because just now – on my third trip to the house, My Guy’s fourth – we realized the former usage of the shelf unit in the basement. 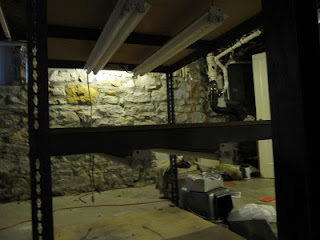 Hmm. How useful that each shelf has its own lights!
And then My Guy was all street-smart. “Uh, maybe it was used for … growing.”
So, yeah. We have a pot farm in our basement. Great!
Once we got over that, My Guy commenced replacing the 27 broken lightbulbs around the house, and I commenced cleaning one of the bathrooms.
You know how there’s dirty, and then there’s willful destruction?
So, yeah. If I’m wiping random brown and yellow stains from walls, window sills, and basically every surface? And if I was at it for more than two hours and still didn’t get done? That’s willful destruction. And if you’re a grown damned man, like the man who lived in the house before it was owned by the bank? You should be able to aim. Just sayin’.
So, basically, I have been dealing with shit all day. Huzzah!
But I did get teary-eyed when we walked into our house for the first time. Our house. 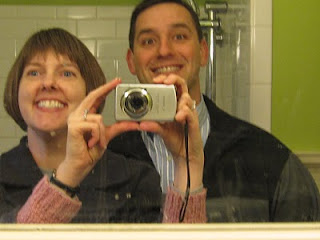 Yes, it warranted a filthy bathroom mirror self portrait. Life is good.
December 29, 2010 by Becky Brown
Previous Post Next Post

In which I douse my home in blood.

You know how it is.