The royal wedding: a primer.

Kate? You and I have a lot in common, both being April brides and all. Honestly? I’m really glad that it’s been more than two weeks since my wedding. It’s only fair that the hubbub around my day has worn off a bit so that you can have your own day in the sun. 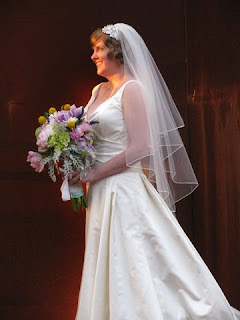 I hope you don’t think this is presumptuous, but I thought I’d share what I learned during my wedding. You know, so you can make the most of your big day.

Wear flats. Seriously. I wore these Borns and my feet felt happy all night. 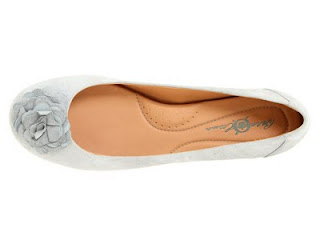 Take a nap. I snoozed for about an hour before I started getting my hair and make-up done. It was cool. Otherwise? My parents and I would just have been sitting around looking at each other and being nervous. While I slept, my dad watched Indiana Jones and The Raiders of the Lost Ark. Everybody wins.

Try to talk to everyone. They got dressed up and got babysitters and bought a gift for you.

Try to thank everyone, especially the waitstaff and DJ and all those other folks that often get overlooked but are critical to a successful wedding. One of the best hugs I got all night was from the woman who waited on us during dinner. I wanted to put her in my pocket and take her home.

Make peace with the crazy. I don’t mean to make assumptions about your family or the royal clan, buuuuuut … let’s say you’re me. And a fair number of your extended family has outed themselves as batshit crazy in the last, oh, 10 years. These people will be at your wedding. And batshit crazy generally doesn’t take a holiday, even for important events like weddings. Leave it be. Smile graciously in the face of the batshit crazy, and know that you will have lots to laugh about later with your groom.

Be prepared for the bridal suite. No, I’m not talking about sexytime. I’m talking about snacks and slippers and utensils. Because you will be starving. And even if you’ve been wearing flats, you’ll be delighted to be reunited with your slippers.

Admit defeat early. Know that you cannot host a freakin’ brunch the day after the wedding. Luckily, many wise women advised me that I was smoking crack if I attempted such a thing, and they were right. The day after the wedding, My Guy and I lounged about in the hotel room, eating wedding cake and watching Major League on cable TV. It was perfect. And I had zero desire to see anyone or talk to anyone or smile at anyone except my new husband.

Have fun. When everybody says it goes so fast? Dude. They are so, so right. So be in the moment. And make it fun. We made our grand entrance to Neil Diamond’s “America.” And one of my favorite moments was hearing the low intro build and build … and then hearing my brother cackle in recognition and approval. 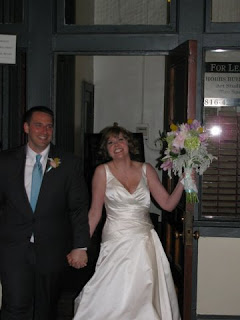 Well, my auntie drew an X on my ring finger with a ballpoint pen so that My Guy would know which finger the ring went on.

My Guy flubbed his vows, and so tagged on that he promised to trip over words during important public speeches.

I held my dad’s hand so tightly that he’s just now regaining feeling.

Our sweet officiant got emotional and lost his place in the ceremony.

We were absolutely overwhelmed by the love and support and joy of the people who came out to support us. 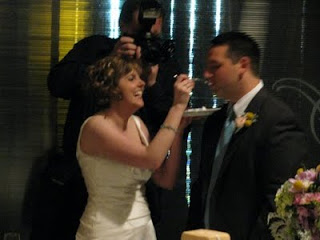 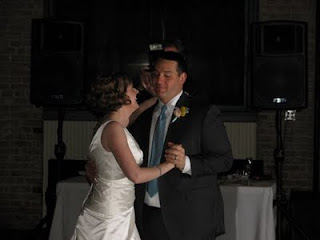 Kate? May you also be so lucky.