A mean mom. And broke, too.

Lil’ Frankfurter typically smells like fish. This is mostly due to his nasty-ass teeth.

So, being the unreasonable mama I am, I took him to have his teeth cleaned on Thursday.

They had to pull one of his front teeth.

I’m trying to convince him that he looks like he was in a bar fight and is therefore a total bad ass. I don’t think he’s buying it. At least he wasn’t Thursday night.

He kept listing to the side. He wouldn’t just give up and go to sleep, because admitting defeat is for wusses. Instead, he kept leaning at about a 45-degree angle. 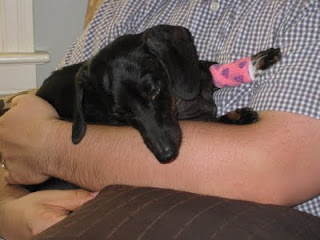 Yes, it was adorable.

Cut to Friday night. I refused to give up and go to sleep, and so was barely with-it when I finally got up off the couch. As I stepped over Big Doodle, I noticed that the usual fatty tumor thing on his side was replaced by this bloody monstrosity that looks all red and veiny, like the planet Jupiter. Except where the storm is? There’s a hole with gunk coming out of it.

We were back at the vet Saturday morning. Poor guy is doped up and scheduled for surgery on Thursday. But meanwhile? Meanwhile, I can hardly look at Jupiter, but I’m enthralled by it. It’s so completely and utterly disgusting. We’re calling our dog “Massive Side Wound Doodle.” He has an open wound and is leaving blood all over our baseboards, because he keeps laying against them, applying pressure to Jupiter and causing it to goo all over.

So, just another weekend in paradise. You know.

Things I said before 9 a.m.