My Guy and I went to the mall tonight.

Yes, this is news and definitely blog-worthy. My sweet husband hates to shop and especially hates to shop for clothes. So, when he mentioned that maybe at some point possibly in the future we could maybe go to Eddie Bauer because he wanted to look for a shirt, I practically threw him in the car.

We went to the mall. We went directly to Eddie Bauer. My Guy tried on a record 8 shirts and actually  purchased 3 and a vest. This is the equivalent of several years of wardrobe stocking. The trip was a wild success!

Walking out, I noticed a small black car with a ham radio license plate. These always catch my eye, as my dad is a ham with a ham radio plate. As hobbies go, it seems ham operators are kind, decent folk. As my brother once pointed out, though, there aren’t a lot of sexy people in the hobby.

I don’t know about you, but I always look for the sexiest hobbies. That’s why I was drawn to blogging. Obviously.

Anyway … the car with the ham radio plate was also one of those cars with lots of stuff in it. And stuff in the back window. Stuff like … a stuffed squirrel.

Now, I kind of figure that standing over a strange car in a mall parking lot is the type of thing that can get you picked up by the mall cops and thrown in mall jail. But this was a risk I had to take tonight.

I leaned over the car and really examined the squirrel. The teeth and claws were clearly real.

I had stumbled upon the car of a ham radio operator who tools around town with a taxidermied squirrel in his back window. And that car was parked outside of Nordstrom.

Why oh why would anyone feel compelled to taxidermy a squirrel? And why put said taxidermied squirrel in the back window of your Nissan? Are you actively trying to never get laid ever again? Or is the squirrel your spirit animal? If he is indeed your spirit animal, I’d think you’d want him on the front dash, starring confidently into the future, instead of in the rear, focusing on the past.

Also, if you’re a squirrel, would you be insulted or pumped that your corpse was stuffed and used as the mascot of a small, cluttered import?

Seriously. How do you feel about this squirrel-as-automotive-detailing business? 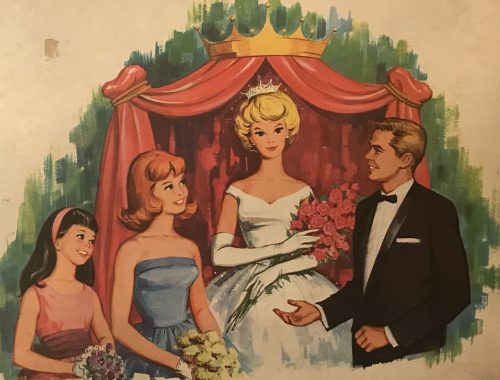 Who will be Queen of the Prom?

Two things that made me laugh this week.