The mileage is crappy, but who cares?

The treadmills at our gym face a busy street. And that street is lined with bars and restaurants. So, My Guy and I are the gym rats who are pitied by all the folks going out for pizza and beers. (If they only knew how un-gym-rat I am …) However, we are also the smug people keeping our heart rates up while watching many a pub crawl attendee almost get hit by various and sundry SUVs.

There’s a character that we see around 9 most weeknights. He attempts – rather unsuccessfully – to parallel park right in front of the gym. We always have a front-row view of his parking. Now, parallel parking is my Achilles’ heel, so I’m not judging. But the extreme challenge of this particular parallel parking is probably due to the land yacht in question. 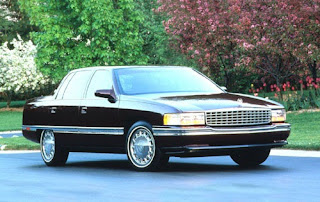 My grandparents had this car in a shimmering emerald. We called it The Green Boat, and my grandpa would never tell what happened to the the passenger-side mirror. A man needs some secrets.

Now, the DeVille we see near the gym is not your grandparents’ Caddy. This DeVille is a bit of a lowrider, and the windows are tinted. It has rather subtle but clearly custom pinstriping, including orange flames on each of the front doors.

There’s a ying/yang symbol in place of the hood and trunk ornaments. And then, like all good tricked-out rides, it has cop-style search lights on both the driver’s and passenger sides.

It’s a guy of undetermined age who is always wearing ultra-white tennis shoes and an unironic fedora. And he always goes into the very best dive bar, the one with the curved red vinyl booths. The bar where you’d secretly love to be a regular.

But I prefer to believe that he drives that tricked-out hoopty and parks on the curb and wears a fedora and goes to the bar weeknights – but not weekends – because he simply does not give a shit.

That’s a guy I admire.

Please tell me I’m not the only one who crafts personas for strangers. Who have you created in your mind?

Today’s show is brought to you by the letter W.