That UTI looks good on ya.

Hallmark doesn’t make a card that says, “Congratulations on your hellacious urinary tract infection.” But they should. Because I would so totally buy it.

The labradoodle? He of the emergency vet visit, wherein the vet said, “Oh, there’s way too much blood for this to be a UTI, and I saw a mass?” That guy?

I mean, I’ve had a few UTIs, and ohsweetOprah, they are horrendous. But having Big Doodle be miserable and on freakin’ amoxicillin is a gajillion times better than my poor kid having a mass in his bladder.

Basically, I just paid $1390 for amoxicillin and Big Doodle’s medically necessary and really unfortunate manscaping. But I’m kind of OK with that. I just couldn’t fathom that we could lose both the labradoodles in a year. I couldn’t wrap my brain around the idea that the gentle horse that I walk around the neighborhood every day could be deathly ill.

I am so, so thankful that I didn’t have to.

Thank you all for your kind words. I appreciate you more than you’ll ever know. 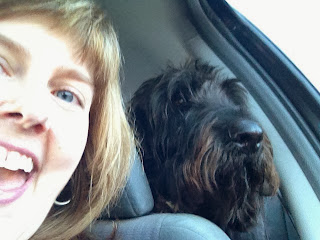 This is us, leaving the vet. Labradoodles are totally into selfies, yo.
December 4, 2013 by Becky Brown
Previous Post Next Post