Labradoodles are horrible at keeping secrets.

So, it seems that the number one way to deal with a stress fracture is to pout. I’ve been doing a lot of pouting, and a lot of couch-sitting. And a lot of being super-mature, obviously.

A few days ago, I had just had it. I’d run errands and been to the grocery store, and I was beyond wiped out. Everything is hard when you can’t walk normally. Woe, woe to me!

So, I retreated to bed and Netflix. And it was cold. And my husband was out of town. And so I threw a sheet over the bed and hoisted my 80-pound labradoodle up on the bed so that the entire pack could watch Netflix and chill.

Big Doodle loved it. Looooooved it. He stretched out and sighed repeatedly, signalling that he was finally – finally! – up where he belonged. Cue the song from “An Officer and a Gentleman.”

But the thing about Netflix and chill is that it can’t last forever. Especially when your husband is on his way home from the airport, exhausted, and hoping to collapse into bed. So, after several hours on the bed, I attempted to convince Big Doodle that it was time to get on his own bed. Off my bed.

This did not go well.

Big Doodle stood up on the bed, circled his wagons, and then flung himself across the bed. If you doubt that a dog can take up an entire queen-sized bed, you are mistaken. Now, not only would My Guy not be able to use the bed, but I wouldn’t either. There was only space for Mr. Stretchy, Big Doodle.

I got him up again. He sighed, acted like he was going to get off the bed, and then collapsed with his head on my pillow. He then proceeded to look as pathetic and adorable as possible. 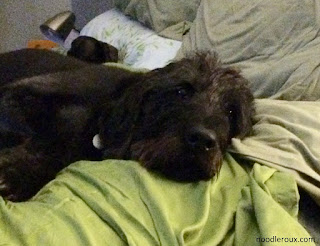 Of course I took a picture.

Finally, I scooted his booty to the edge of the bed, and little by little slid him off the edge. He let out a noise that can best be described as “pissed-off yowling.”

I stripped the extra sheet and all its dog hair off the bed and felt pretty pleased with myself. I’d gotten rid of the evidence before My Guy came home! The Doodle-on-Bed would be our little secret.

Except Big Doodle didn’t get the memo. For the rest of the night – nay, for the following 3 nights – he worked his way around the bed, resting his chin on the mattress and sighing heavily. Sometimes the sighs were accompanied by a pissed-off sneeze. Other times, a forlorn “Hern” sound. But it was always pathetic.

It took about 3 minutes for My Guy to get fed up with the drama dog and ask, “Why is he doing that? Did you let him on the bed?”

I want to get married, not weddinged.

Nighttime is not the right time.