Don protective headgear. Breakfast foods are falling from the sky.

Mercury is in retrograde, which is the excuse I’m using for the fact that I accidentally texted a client and asked if she wanted chips from Chipotle.

I guess of all the texts I send my husband, that was a pretty innocent one to accidentally send to a client. At least it wasn’t “Why are there no BBQ potato chips in our house? EVERYTHING IS TERRIBLE.” Or “Today was a good day. Didn’t hafta use my AK.” Or “Come hooooooooooome. Take me out for pizza before I eat allllllll the potato chiiiiiiiips.”

Yes, those are actual texts I sent My Guy. Clearly, chips are a vital component of our union. And texting is an important mode of marital communication.

A few days ago, My Guy didn’t text me. He emailed me because more weird stuff was going down, and he had super important things to say. And what he had to say was this:

So, I almost got into two wrecks this morning and a pancake randomly blew onto my windshield.

Wrecks? OK, fine. People drive crazypants on the road that leads to My Guy’s office. But a pancake?

I was filled with so many questions. Did someone throw it out of their car? Was it dropped by a bird? Who was missing their breakfast? Did you eat it?

The pancake was so weird. The light just turned green and I was beginning to move and it just plopped down right in front of my face. I have no idea where it came from. A bird seems the most likely culprit. I forgot my wallet sized syrup so I didn’t eat it.

The fact that he was unprepared and didn’t have syrup on hand is obviously very upsetting. But where did the pancake come from? Was it a sign? Was My Guy actually adopted and his real last name is International House of Pancakes, and he’s the long-lost heir to the IHOP fortune, and oh, by the way, he will now be Earl of Pancake? It had to be something like this because who has a flippin’ PANCAKE fall from the SKY right onto their windshield – specifically the part of the windshield where they look?

I guess I asked too many questions because he didn’t respond. Some thing about having “a real job.” Whatever. But, of course, I cornered him about it when he got home.

I was not deterred. Was he absolutely sure he wasn’t going to be Earl of Pancake? Because I like fixing up old buildings, and, you know, instead of being responsible for some big manor house, he’d be responsible for the upkeep on all those old-school chalet-style IHOPs. We have one near us and I want to love it but it’s always sticky and smoke-filled and makes me feel like I might have contracted Ebola.

Anyway, My Guy became – dare I say it – defiant. He will not be assuming any duties tied to the earldom of Pancake. Actually, his exact quote was, “I ain’t refurbishing no damned IHOPs.“

Well, then. I guess we aren’t aristocrats after all, not with that attitude. But if the windshield pancake wasn’t a sign of some life calling, then it must be a sign of END OF DAYS. Because c’mon – pancakes are raining from the sky.

Or, maybe it’s yet another story about birds dropping random stuff on people, like when a hawk dropped a dead bird on Alice’s dinner plate. Either way, everybody get a helmet. Because I’m pretty sure that even a pancake gathers pretty good velocity when dropped from a few hundred feet. 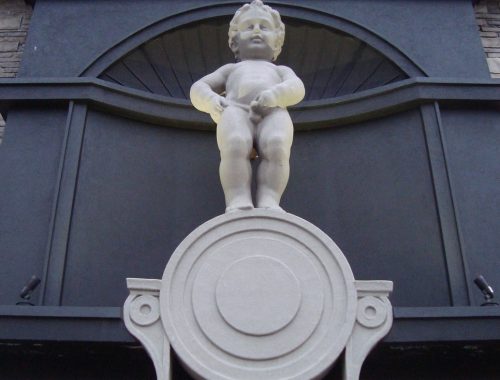 Right on, Bob. Right on.

And yes, I need to do more yoga.