Why dogs can’t be trusted but you also shouldn’t cross them because they are organized.

If you’re like me, you ate your weight in sugar over the last month. And, it’s safe to say that your pants don’t fit. And you generally get in trouble for going out in public not wearing pants. So you resolve to stop eating sugar straight from the bag. And you resolve to start moving your body again in ways that aren’t merely moving food from a plate into your gaping maw.

If you’re not like me, now is not the time to talk about how you actually lost weight over the holidays or how much you love CrossFit. Go sit in the corner.

So, it is time to get more exercise. And I’ve tried. I really have. But in the midst of a modest workout, I uncovered a vast conspiracy, one that extends well past my corner of the world. An especially shady syndicate, if you will.

Here’s the deal. I have written before about how my dogs lose their minds when I attempt to do yoga at home. I get stepped on. 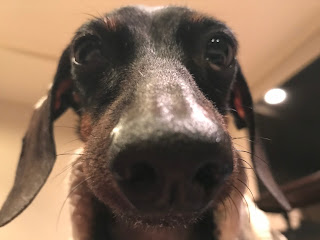 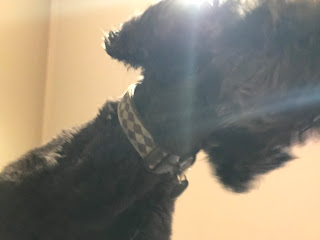 And barked at for not throwing the Kong. 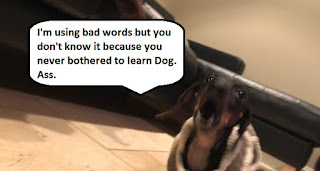 And, because the winter air is especially dry and Lil’ Frankfurter’s skin is especially delicate? I’ve been surrounded by blood from his cracked lil’ paws.

(No photo of this – and you’re welcome. The latest bloody paw incident left our rec room looking like a crime scene. For such a tiny dog, he really bleeds a lot.)

So, as I was prone on the floor, being barked at and surrounded by blood, I thought, “It’s almost like they don’t want me to do yoga.”

How had it taken me so long to realize this?

Big Doodle and Lil’ Frank are clearly trying to disrupt my Zen and discourage me from doing yoga in our home. It’s almost like they want me to do yoga … elsewhere.

And then it all clicked! 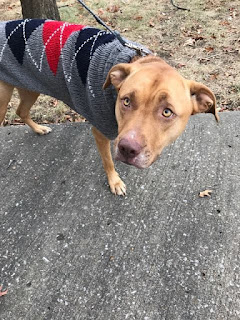 She is a connoisseur of large sticks. 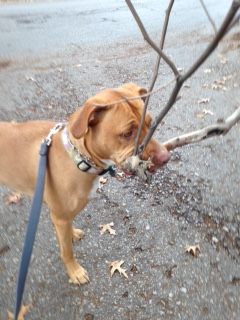 If it’s less than four feet long, get the eff out. 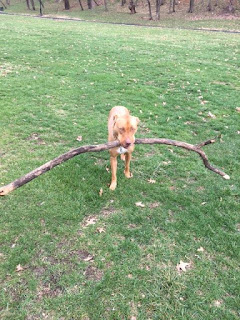 Sure, in theory her mom Patti has the studio. But we all know who runs the show. I mean, look at these sticks. Olive means business. 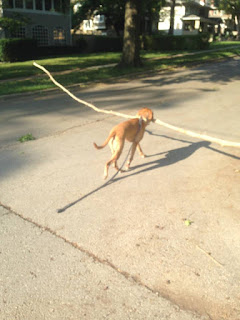 You can’t tell me that Lil’ Frank, Big Doodle, Olive, and all the other dogs aren’t in cahoots. Clearly, this Canine Yoga Cartel is working to increase visits to Olive’s yoga studio. I’m guessing Olive collects sticks on her daily walks so she can use them to pay off members of the syndicate who send their humans to her studio.

My dogs probably get kickbacks in the form of tennis balls, since they aren’t really into sticks.

But whatever arrangement these pooches have, it’s working. I’m a strong woman, but I’m no match for a canine cartel. And I’m pretty sure that even if I put up a baby gate and do yoga on one side with the dogs on the other, Lil’ Frank will still bark his head off and leave me an assortment of bodily fluids to clean up.

I will go to the yoga studio and I will practice with my like-minded peeps. We will work on our ujjayi breath and try to focus while our minds invariably wander. We’ll think about our dogs and their strange yoga-related behaviors. We won’t mention them to anyone else, lest we look like bad parents who didn’t train their pups properly. But we’ll all be in the same boat, adrift with a vague unease that something is amiss. It’s almost like those dogs are … planning something …

Why I’m sad my neighbors are moving.