This morning, I was wracked with anxiety over something that happened in 1983.

I was in third grade and, as youngsters of my ancient generation were wont to do, I learned cursive. One day, we were assigned what I’m sure was supposed to be a “fun” task. We were to pick our favorite cursive letter and then write words that started with that letter – an animal, any sentence of our choosing, five names.

I chose the letter L. And my little third-grade brain completely freaked out and couldn’t think of five names that started with L. So, I carefully wrote out “Laura, Lonnie, Larry, Larueow, Leaomy.” You know, in hopes that those last two were maybe, like, names? Names that kids would not be privy to, but that adults knew, and then my teacher would be super-impressed at my knowledge of obscure names?

Yeah. It didn’t work that way. My page of lined writing paper came back with a big ol’ “-2” at the top. I was heartbroken.

This morning in the shower, I found myself listing L names … Laura, Laurie, Lorrie, Lori, Lauren, Laurel … my God, I am so prepared now. I could pass with just women’s names alone! And yet, I’m still anxious about that long-ago assignment and feel that I need to be prepared lest someone approaches me on the street and demands that I rattle off five names that start with the letter L.

This particular flavor of anxiety is just one of the cornucopia that I’m experiencing as of late. I’m guessing I’m not the only one who finds themselves saying, “He did what? Are you effing KIDDING ME?!?” at least once a day.

So, there’s that. And there’s my sweet Big Doodle, he of the bladder cancer and advanced age and zero patience.

Big Doodle can’t sleep through the night anymore. Bless his heart, he will wake me up to let him outside. This can happen any time between 3 and 6 a.m. I take him downstairs, he does his thing, I go potty out of solidarity, and then we go back to bed. Or not, as the case may be.

I seem to have lost the ability to go back to sleep after I’ve been up. That has made life … challenging. And Big Doodle’s lack of any hip sockets to speak of means that he isn’t always so psyched about going back upstairs after doing his thing.

Sometimes, we lie on the couch. Others, we go to the downstairs guest room. He sleeps and I … try? I don’t want him to feel abandoned, so if he doesn’t go back upstairs, I don’t either. Besides, we are having more Doodle Dementia Days.

You know, like the night he wanted to sit in the middle of the patio and look at the moon at 3 a.m. Or today, when he was going bonkers inside the house but would do nothing but bark at the sky when let outside. 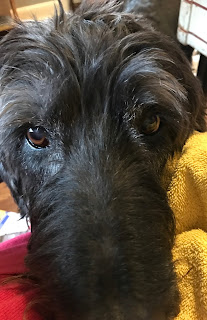 I see this a lot.

I just got off of a work call. At the start of the call, all was calm and bright. Both dogs were asleep – Lil’ Frankfurter in my lap, Big Doodle on a couch at the other end of the house. But about halfway through the call, Big Doodle came sauntering into my office. He got right up in my face and blarfed out the loudest, most “Oh dear God, are you dying?” hack that you’ve ever heard.

The good news is that the guy I was talking to laughed with me when I explained what happened. But for the rest of the call, Big Doodle would lie still and then cough cough HACK mucus HACK unexpectedly. I just kept my hand over my microphone unless I was actively speaking.

But I decided to focus on the funny. Do you know how much mucus an 80-pound dog can produce? Especially a geriatric 80-pound dog who has no personal etiquette? It’s a lot of mucus. Mucus that he wants to show you by getting right up in your face. Because he loves you.

I should probably be feeling anxiety about this instead of something that happened when I was in third grade. It’s not like that cursive assignment prevented me from going to college or anything. I don’t look back on it as the turning point when it all went to hell.

I guess what I’m saying is that I’m working on perspective. Sometimes I have it, and sometimes I don’t. And stress and weariness are making themselves known in odd and powerful ways.

How’s with you? And what are your favorite / worst ways stress shows up in your life?

Are you freakin’ kidding me?

Two things that changed my life this week.