In which you’re just gonna have to get your own snacks and toilet paper. 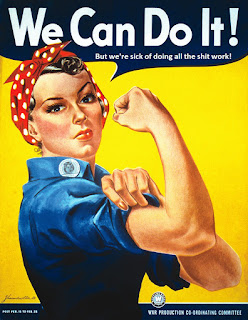 Did you feel a slight seismic tremor yesterday? It was a woman saying, “Fuck right off.” Except in nicer language.

My pal serves on a volunteer board of four men and four women. Every year, they have a big to-do board retreat. It’s off-site with tons of food and a program and it’s just A Thing. Yesterday, the woman who has planned it for the last several years asked for help.

Woman No. 2 immediately volunteered. Woman No. 3 is gravely ill and so was off the hook. And then? Then, the entire board turned and looked at my friend, Woman No. 4.

They just looked at her. They fully expected that she would / should be the person to volunteer.

(I know. I know! This is the part of the story where my eyes rolled so far back in my head that I could see myself having a stroke. Because all women have been there, right? We’ve been there, we’ve just done shit because it needed to get done, we’ve been the person who is suddenly responsible for some shit job because for the love of all that is holy, no one else seemed to notice that SOMEONE NEEDS TO BUY TOILET PAPER REGULARLY. My friend’s situation has played out time and time and time again.)

But my brave, strong friend was not having it. Not on this particular Thursday. No.

She said, “I’m happy to help. But I’m not OK with this being an all-woman committee.”

All the men just stared at her. The male board chair turned red, laughed nervously, and said, “Well, why not? Nothing wrong with that, right?”

And Woman No. 4 said, “Nope. We need gender diversity. The board is nicely balanced with four men and four women. The planning committee needs to be balanced, too.”

Finally, the guy she knew would eventually volunteer did. The board moved on. And the guy sitting next to Woman No. 4 leaned in and whispered, “No, thank you. I already had my turn organizing that retreat.”

To her credit (or not?), my friend did not immediately start screaming, “What, Bruce? What? You helped carry some trays of food into the building six years ago and now you’re off the hook for infinity? What? Are you even capable of feeding yourself? Because you seem pretty spineless to me!”

Instead, she gave him The Eye. But the entire conversation caused a slight seismic shift in the meeting and, hopefully, the world.

At home, my friend’s husband laughed and said, “You’re just lucky none of the men said their wives could help.”

Then she killed him and made it look like an accident.

There’s so much unaccounted labor. Unvalued labor, unpaid labor. Who schedules the meetings? Who sends the reminders? Who makes sure the supplies don’t run out? Who never gets thanked or paid for this work that just magically gets done? This work that half the population doesn’t even seem to realize exists?

I think we should get t-shirts made that say, “If you weren’t stranded without toilet paper today, thank a woman.”

My ugly charm bracelet and the lovely novel, The Charm Bracelet.