And it was super fun. Really.

Last night, My Guy With Two Dogs and I had a hot date. We went out for barbecue – at the best place in town, which is in a gas station (seriously). Then, we were off to see my other boyfriend. 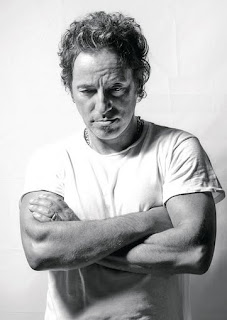 Bruuuuuuce!
Except! Except that on our way out the door, My Guy warned me that we would probably run into his ex-wife’s sister and her husband. They were going to the concert. And while the former brother-in-law was one of the nicest humans ever and a good friend? The ex-wife’s sister was a bit of a snow queen. My Guy was concerned about my comfort level.
I considered this for a moment. And I thought about all the times Ex-Wonderful’s ex looked through me, or how she had to approve of me before I was allowed to spend time with their daughter, or how her mother wore sunglasses inside a church – all the better to look down her nose with.
Dating in your 30s is complicated.
I considered all of this. And then I considered how I’ve spent the last 10 days cleaning up vomit, poop, and pee, and how Lil’ Frankfurter actually gacked on my person.
I considered all of this. Then, I told My Guy, “If your former sister-in-law wants to try to ice me, she can fucking bring it.”
Except! Except that My Guy’s former brother in law texted him. Bruuuuuuce canceled.
No Born to run. No Born in the U.S. No long guitar solos where truthfully I zone out but am still glad I’m there. No Bruuuuuuce. No ice queen former sister-in-law who would turn a critical eye and then provide a full report to her sister even though it was totally unfair because I was having a bad hair day and didn’t even have the opportunity to prepare for such an event.
So, My Guy and I did what anyone would do.
We went to Target.
Image courtesy of Google images. Thank you, Google. Really.
October 28, 2009 by Becky Brown
Previous Post Next Post