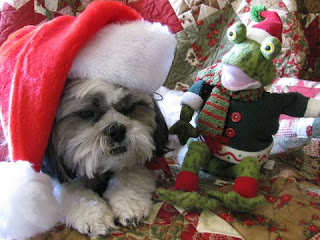 Christmas is a mere week away! Krampus the Christmas Frog and his shih tzu helper are ready. Are you?

Yeah. Basically, I read some books and learned some stuff.

Hedy’s Folly: The Life and Breakthrough Inventions of Hedy Lamarr, the Most Beautiful Woman in the World (Vintage)

– Richard Rhodes
Hedy Lamarr was the most beautiful woman in the world … and she happened to invent some super-smart technology. This book tries to sell the Hollywood starlet as an unsung hero of World War II. However, it spends so much time focusing on her co-inventor that I ended up not knowing much about Hedy at all. Since I’m not much of a tech geek, my mind wandered.

I finished the book fixated on the fact that Hedy was bitter about the lack of acknowledgement for her technological work. She also refused an invitation to a fete thrown in honor of her inventions because she had aged and didn’t want to be seen. This shouldn’t have been my big takeaway – I feel like I missed the gist of this book. This might be reader error on my part, but I’m marking this tome as a missed storytelling opportunity.

At Home: A Short History of Private Life

– Bill Bryson
If you ever need to prime and paint, then scrape, reprime, and repaint a fireplace surround, this is a great audiobook to accompany you. Don’t ask how I know.

Bryson is my favorite Iowa-born expat because his storytelling is so down-to-Earth – it’s like hanging out with your dad’s old pal. I especially love his audiobooks because he has a soft, soothing voice, and his delivery is just fun. If he’s telling you a crazy story, he’s not even going to pretend not to be incredulous himself.

At Home is about just that: home. This book talks about the evolution of houses – everything from domestic chores to the history of the living room as a stable. For animals. For real. We are now uptight clean freaks by comparison.

Special shout-out to Cyndi B. for the recommendation several months ago – thanks!

The Devil in the White City: Murder, Magic, and Madness at the Fair that Changed America

– Erik Larson
I bought this book when it first came out about a gajillion years ago. I shelled out money on the hardcover (gasp!) based on the strength of a very compelling review. Then, the book sat on my shelf, untouched, for several years. Then I loaned it to my brother. He let it sit on his shelf for several years. I got the book back. Finally, I checked the audiobook out from the library. It came due. I renewed it. Then, I finally listened to it.

I’m not sure if my reticence to read this book was due to the gorey, horrifying nature of the subject, or just general laziness on my part. Let’s go with the former, as this book tracks a serial killer who saw the Chicago World’s Fair as a perfect opportunity. I learned a ton about the fair and the logistics of creating giant buildings meant only to be temporary. Also, I had no idea the Ferris Wheel was such a marvel. I have a whole new appreciation now.

But the serial killer in question? Oy. Bad news. But a really interesting book of good and evil colliding.

Sin in the Second City: Madams, Ministers, Playboys, and the Battle for America’s Soul

– Karen Abbott
I was evidently on a bit of a Chicago-at-the-turn-of-the-century kick. Abbott’s book studies 2 sisters who invented themselves and a whole new kind of debauchery at their Chicago brothel. They basically revolutionized the world’s oldest business by making it classy – their establishment had a gold piano, and wouldn’t even let a gent through the door without a credit check.

Of course, the competition did not take kindly to strangers coming in and taking the best girls and the best clientele. And the underworld has politics like any other area of society. This book has intrigue! And murder! And guys named “Hinky Dink!” It paints vivid pictures of a very specific moment in history.

Need other book suggestions? Check out my takes on beachy reads and biographies.

Disclaimer: When you purchase a book through my links, Amazon throws some spare change my way. This enables me to pay my library fines, stay out of library jail, and keep entertaining you with my hard-hitting literary criticism.

How to fail miserably as an adult.

Book It! And get a personal pan pizza!