Two things that changed my life this week.

Doesn’t that title make me sound like Oprah? Or at least someone who writes clickbait? Maybe if I titled it, “Two things Oprah doesn’t want you to know!”

Well, at any rate, these things twisted my reality in the last few days. 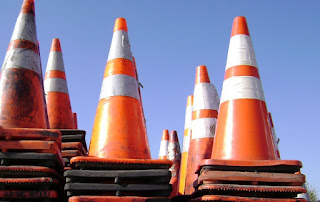 There’s a guy around the corner who has been parking his truck all illegal-like on the street. But he’s put two orange cones around the truck. The cones send the message that hey, this is totally legit. Nevermind that it’s not a utility truck or a delivery truck. It’s just some dude’s GMC pickup.

It occurred to me that traffic cones are the universal sign of “These are not the droids you’re looking for.” They’re like an instant get-out-of-jail free card! You can do whatever you want as long as you have some orange cones around you.

Clearly, I need some traffic cones. Forget my parallel parking anxiety – I will just leave my car in the middle of the street, throw out a few cones, and call it good. And I bet the cone shield works without a car, too. Worried about getting arrested for loitering? Set up some cones around ya. You’re no longer loitering – you are doing sanctioned work. The Lord’s work.

Obviously, this is life-changing.

I was shopping a few days ago. I had actually made an effort that day … which basically means I wasn’t wearing running shorts. I had on a dress and cute sandals. I felt good.

A woman walked passed me, touched me lightly on the arm, and said, “You are so beautiful.”

Now, I recently took a quiz to tell me which Golden Girl I am. It said I was a Sophia, but I’m not so sure. I think my response to this kind woman’s compliment might make me more of a Blanche. What flew out of my mouth was not, “Picture it: Sicily, 1923.” Instead, it was a very southern, “Oh, honey, thank you!”

She walked off. I don’t even know if she heard me. She certainly didn’t stick around to comment on which Golden Girl I am. But what she said stuck with me for days.

At random moments, I’ve thought, “Oh! I’m so beautiful! That lady said so!”

I guess we all need those friendly reminders, those random acts of kindness. I’m so thankful that woman took two seconds to say a few kind words to me, even if they were code for, “Thanks for not wearing those ratty shorts again,” which I’m pretty sure they weren’t.

What’s changed your life this week?

Just look at her legs.

Shout it out loud.

Statues and ferries and girl power!