Potpourri for $200
Lil’ Frankfurter has discovered lightening bugs. He watches them and goes to eat them, but when they light up, he freaks out and jumps back. Picture this scenario happening over and over and over again. I don’t know why I even have cable.

Potpourri for $400
Today, my shrink was doing her typical “Uh huh, uh huh, uh huh” active listening … while also grabbing a tissue and in slow motion moving toward a mosquito that had landed on the wall. Dr. Shrink zeroed in on her target and said, “Yeah, you better believe it!” before smashing the pesky bug with – dare I say it? – Freud-like authority.

Potpourri for $600
I’m hosting my book club tomorrow night. And yet? My house is a disaster. All you book club ladies out there: as long as there is lots of wine, do you care if it’s best not to go barefoot in my casa?

Potpourri for $800
Your friend and mind, Green Girl in Wisconsin, wrote: I am SO disappointed you had nothing to post on Bret’s Tony fiasco;)

Girl, I have been trying to get all of my facts straight before commenting on this important news story. Basically, when the news first broke, the Tony spokewoman was quoted as saying Bret got hit by moving scenery because he “missed his mark.”

And I’m sorry, but I totally lost my shit. Bret does NOT miss his mark! He is Bret Michaels! He wrote Unskinny Bop and has turned dating skanks into a multi-million dollar business. He is personally responsible for the resurgence of the bandanna. Bret does not “miss his mark.”*

*Unless we’re talking about choosing the wrong Rock of Love.

Potpourri for $1000
This is for my friend Liza, who has a bit of a creepy crush on my brother. So, Liza, here’s a bit of Poochie Por … uh, Poochie Photo Appreciation. 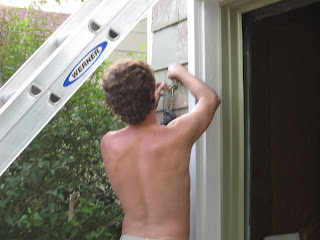 This is my bro doing stuff to my house, all handymanlike. He’s the best.*