On my flight to Boston last week, I had two people fighting over the seat next to me. Because I am just that awesome.

Actually, some princess with sunglasses the size of a hubcap wanted to sit next to me so that she wouldn’t be in the back of the plane. But the guy whose actual seat it was was all, “Uh, this is my seat. Beyotch.”

Jim and I talked for the duration of the two-hour flight. And not in an oh-Jeezus-leave-me-alone sort of way, or a creepy-stalker-guy sort of way. Just in a we-would-totally-be-friends-in-real-life sort of way.

I love talking to new people – everybody has a story, and real life is way more interesting than anything you could make up. Jim told me about his wife and daughter, and the daughter’s autism, and what they’re doing for Christmas, and his his recent sinus surgery. And I told Jim about Corporate Behemoth and the burden of outfitting a home without the benefit of a bridal registry and what it was like to be present at my grandma’s death.

Because sometimes, it’s easier to talk to strangers about intimate things than it is to talk to people you really know. It’s like gravity – it just is. See also: blogging.

1. A kick-ass plane ride that went by in a flash

2. This kind comment as we were getting off the plane: “I’ve so enjoyed talking with you, Cha Cha. I can’t believe you’re not married – you’re such fun and such a catch.” Which totally made up for this summer’s “Good luck ever getting married” debacle.

3. Anticipation for the most awesome advertising campaign. See, Jim works in marketing … marketing of … well, feminine hygiene. Yes. We talked about tampons and pads and menstruation. And we both agreed that some man wrote the whole “Have a happy period” slogan. Because, seriously? Also, did you know that Tampax invented modern feminine products?

Anyway, Kotex launched a campaign in Australia that will hit the U.S. in the spring.

It features this guy. 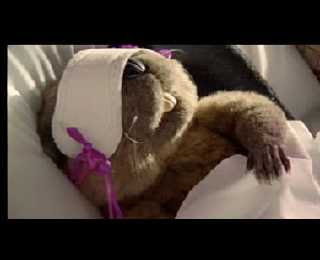 Yeah. Take care of your beaver.

I know it’s sort of low-brow, but come on. It’s a fact of life, so we might as well laugh about it. And this made me cackle.

Why HGTV doesn’t qualify as a reality channel.