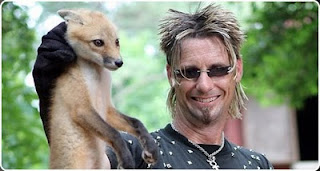 The show follows a family of exterminators as they go about their business in Louisiana. They attack every type of varmint from pigeons to beavers to wasps and cockroaches. They relocate animals when they can. And what I really love about the show is that Billy is obviously really passionate about his job. You can tell he likes explaining to the camera what he’s doing and why, and how certain animals operate. It’s cool.
And Craig the Exterminator? He likes it too.
“Yeah, somebody told me I should watch that show. It’s pretty accurate,” he said. “But did you see that one episode with the roaches?”
At this point I involuntarily seized. “Ugh. Yeah. That was gross.”
“Well,” said Craig the Exterminator, “I once treated a house that was way worse than that. I thought it was carpeted, but really what I was walking on was linoleum covered in roaches.”
At this point in the conversation, I passed out cold. But I’m pretty sure Craig the Exterminator told me that he actually changed his clothes in the driveway of that house because he didn’t want the cockroach funk in his vehicle.
Now, bugs are gross. Whatever. But I feel like I really learned something new today. And that something is that extermination is really, really cool. And I don’t ever want to do it. And that’s why God invented reality teevee.
The End.
Image courtesy of aetv.com.
May 19, 2010 by Becky Brown
Previous Post Next Post

The bomb was at the transmitter.

Ask me stuff. I’ll make something up.