Hoo-wee. It’s been a rough week.
I totally forgot both a hair appointment and an appointment with the periodontist. Now, most people would like to forget an appointment with the periodontist, but I actually really like the nice lady with the thick Chinese accent who is my hygienist. She left a very sad message on my voicemail this morning. “Cha Cha? It’s Wabecca. You ha a dentwal kweening towday. If you need tow rescheduwall, caw …”
She sounded so hurt, and I truly like her. It broke my heart. But I thought it was tomorrow!
And the hair appointment? Well, I would make a hair appointment even if I were on my deathbed. But this week? I totally spaced it. And my sweet, crazy stylist left me a message asking if I was hurt, because I never, ever miss.
Again? Broke my heart. I’m so sorry! I’m sorry my brain is mush!
I think the applesauce-like consistency of my brain matter is a testament to how very, very worried I was about Antoine the TBD Breast Lump. And how my subconscious is still spending a whole lotta energy working it all out.
Plus, if we’re honest? I ran around doing all sorts of stuff like vacuuming and moving heavy stuff on Monday, so Tuesday I was in so much pain and so tired that I could hardly function. Pacing myself? Taking it easy? Whaa?
The truth is that I’m just mad as hell. I’m mad that I had to deal with Antoine in the first place. I’m mad that I’m still sore. I’m mad that our new house seems to be Casa de Canine Bodily Fluids. And I’m mad that when I finally broke down sobbing last night over the gross unfairness of fibrocystic breast disease and the proliferation of doggie diarrhea that we are so unsettled and such white trash that I had to blow my nose on toilet paper.
All of those things were cause for equal disdain. Yeah, I know. Maybe I need to chill a little bit. But I’m working through it.
I’m trying to redirect my energies to more positive, encouraging thoughts. Like coercing, umm, I mean, convincing the good people of Mattel to take advantage of the social media juggernaut noodleroux by giving me Krystle and Alexis Barbies.
Think of all of the adventures the ladies of Dynasty will have! I’m pretty sure we could hook Foxie Doxie up with some sort of harness and they could ride him like a horse. Mattel, isn’t that enough of an enticement?
The Golden Dream Barbies came out of their Suitcase of 80s Awesomeness to depict some of the fun that could be had if only Krystle and Alexis came to live with us.
Here they are celebrating the good news about Antoine the TBD Breast Lump. 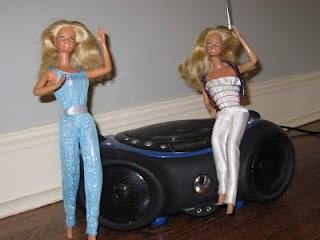 They went to the discotheque and got their groove – and their circa-1980 pantsuits – on. There’s something very Linda Evans about these Barbies, don’t you think? The Golden Dreams and the Carringtons are kindred spirits! Think of all the fun they could have together!
And? Well, I didn’t want to play this card, but one of the reasons I’d really like Krystle and Alexis to join our clan is to mentor the Golden Dream Barbies.
As you can see, the Golden Dreams didn’t survive the 80s with quite the grace and style as the Carringtons.
This is what happened when My Guy attempted to help me depict the Golden Dreams working on the computer. 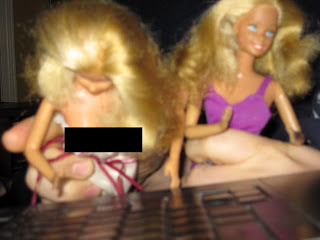 It’s not that kind of Web site! Pull yourself together!
So, Mattel? It’s not just me. Think of it as outreach to the aged Barbies, the Barbies who have years of dedicated service but the tired-ass wardrobe to prove it. These Barbies don’t need a hand out – they need a hand up. A Barbie sister who has it all together – a Barbie sister like Krystle or Alexis. But preferably both.
Think about it, Mattel.
February 11, 2011 by Becky Brown
Previous Post Next Post

The fine art of the written word. Also? Cussing. And some bitches.