I have the goal of posting 10 times a month in 2012. Since I haven’t written in something like 23 days, you can see how this is going.

So, this is me, getting back on the horse. Even though I hate horseback riding. So I need a new metaphor, one that better reflects who I am as a human being. So, this is me … uh … going back to bed, because I love to sleep and I’m really good at it.
I don’t think that qualifies as a metaphor. Sigh.
Well, I can tell you this: The other night, I
Mothereffer! Foxie Doxie just lifted his leg in my kitchen. I should rename my blog “The Inconsistent Blog About Consistent Dog Pee.”
What I was about to say … is that I went to the grocery store the other night after work. It was hell on Earth, per usual. And I left without buying ice cream.
Horrible, I know.
But my marriage survived, and the next night, My Guy arrived home with ice cream – and that yummy hot fudge that you have to soften in the microwave. Mmm. Mix those together with a touch of peanut butter and a cascade of Rice Krispies, and you have yourself a feast!
The day after that, Lil’ Frankfurter displayed some ear funk. When I first adopted him, he had no hair on his ears. 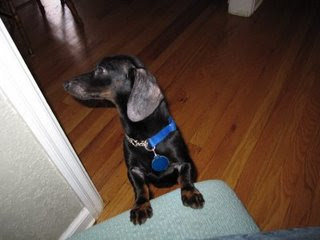 See? Bald ears.
The first few rounds of hair that did grow in on the edges of his ears fell out. Sort of like ear dandruff that took the hair with it. I thought this was the same thing.
But no!
It was only on one side, and it was dark. Dried blood?
Uh, no. Dried hot fudge. Someone had licked an ice cream bowl and gotten his ear all up in it.
As I was turning to my cure-all, the warm washcloth, I overheard my sweet husband patiently conversing with Lil’ Frank.
You are a bad dog. I know, I know – it’s true. Now, you have hot fudge ear. And so we’re just going to have to put you in the microwave. Maybe it’s a good thing you’re so small.
March 8, 2012 by Becky Brown
Previous Post Next Post

I can’t hear you over the whining.

Because I don’t want it all.