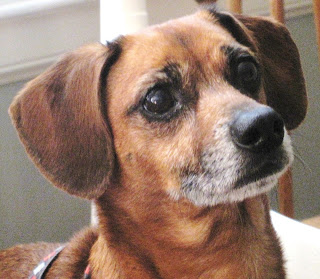 It’s that last one that’s really on my nerves.

See, Foxie has lived with me for 9 years. Or 10. I forget. Anyway, he was completely insane that first week, and my sweet, late Dr. Vet thought that a little sniparoo in the crotchal region would calm him down. But it didn’t.

That first year or 2, I managed to walk him by himself, and targeted times and routes that limited his exposure to other dogs. That way, I limited him screaming like a banshee. My attempts at training were not successful, so I practiced avoidance instead.

But then, I left Ex-Ex, and moved with 2 dogs into an apartment. If you’ve never lived in an apartment with dogs, I have to say … I don’t recommend it. Basically, it sucked.

I walked Geriatric Poodle and Foxie Doxie 3 times a day. And it was on 1 of those walks that I experienced my post-break-up rock bottom.

I’d lived in my apartment for about a week. It was freezing, and it had snowed. And I had not yet learned that I needed to abandon the retractable leashes for the shorter, I-am-the-alpha-and-you-walk-where-I-say-you-can-walk style.

Foxie saw a guy walking a husky on the other side of the street. A husky-breed dog, not a solidly build boy who has to shop in that special section of the JCPenney’s boys department.

That was all it took for my otherwise mild-mannered doxie to lose his shit – screaming, barking … and pulling.

It was icy. He ran to the end of his retractable leash, then proceeded to pull me and Geriatric Poodle down the sidewalk.

I yelled. It did no good. The guy on the other side of the street stopped, probably to enjoy the spectacle. I ended up with Foxie’s very long leash wrapped around my legs and a nearby fire hydrant.

Geriatric Poodle was nonplussed. I was on the verge of tears. Foxie was foaming at the mouth.

The guy across the street looked at us. “Do you need some help?”

I imagine he was trying to be kind, but I was emotionally frail. And so, I simply said, “No. No, just leave me here to die!”

I unorigamied the leash and drug my little dachshund shithead back to the apartment. And then I cried. It was one of the worst days of my life.

Now, all that to say … we, collectively, as a dog and a doggie mama, must have come so far since that time. Except we haven’t.

I have Dog Whisperered the crap out of this dog. He is crate trained. He is affectionate and doesn’t mind baths. He lets me administer eye drops like it’s a walk in the park.

Except those walks in the park? Are still horrendous.

My Guy and I have basically decided that Foxie is just … special. And going to be crazy forever. So, we try to avoid other dogs whenever there’s a leash involved. We hide him behind parked cars. We make him sit mid-walk just to pull it together already.

But I’m still afraid that our neighbors catch one note of his scream and think someone is being disemboweled. 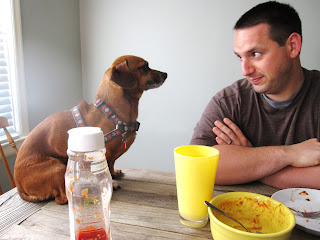 Foxie’s a pain in the ass, but he’s still my baby. My baby with a couple of screws not even loose, but completely missing.

Mea culpas and blogging with friends.