Scarry thoughts on getting fired.

Thank you all for your kind words about my little, erm, employment situation, or lack thereof. I so appreciate your snark.

I’ve also discovered that you don’t have to be an adult to have a strong opinion on unemployment.

On my way home from getting sacked, I saw 2 very energetic boys jumping up and down, waving a sign for their Kool-Aid stand. Of course I stopped.

As I walked up to their folding table, I was taken aback by the super blondness of both boys, and their Joker-like cherry Kool-Aid-stained mouths. They were adorable.

But as I walked away, the blonder and more Kool-Aid-faced of the boys left the stand as well. “My brother fired me, but I don’t even care,” he said, holding up 2 dollar bills. “I got paid, so I don’t even care! I’m gonna go play my game!” And off he ran.

I figured that was a good lesson. I, too, got paid, and now I can go play my game, whatever that happens to be.

Last night, My Guy and I celebrated my firing by going out for dinner with some good friends. We laughed and visited and I felt like things were going to be OK.

Well, that is, until the subject of Richard Scarry came up.

“You know,” our friend said, “our kids are obsessed with hobos. And it’s all because of this Richard Scarry book that has a hobo in it, with the stick and everything. And the book says, “Hobos don’t have jobs.”

Our friend continued, “So, we asked the kids if Mommy is a hobo, and they said that since she doesn’t have a job, she is, in fact, a hobo. So, Cha Cha, I’m sure they’ll agree that you, too, are now one of the hobo peoples!” 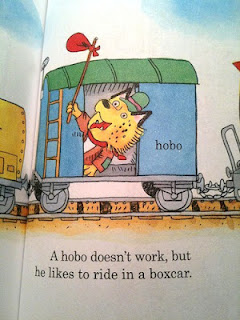 Don’t you think this looks like me? My dad is a train nut, so I have always liked riding the rails.

Image courtesy of underthefuzzygreenhat.com, where writer Lucas Wagner has discovered that he, too, qualifies as a hobo under The Scarry Hobo Law.

The life of the party.

Mice. Why did it have to be mice?