Don’t even try to tell me I shouldn’t write B movies. Check out that title – clearly, I have the gift.

So, I know you’ve been waiting with baited breath to hear how the whole there-was-a-mouse-in-the-kitchen-so-I-covered-everything-in-blood thing went down.

Well, I set the hardcore traps that my dad gave me. You know, the ones that you can only get at the farm and home store? Yeah. They are serious.

So, I set the two traps. Sadly, they didn’t go off immediately. Instead, my rodent antagonist had decided to mess with me. I kept everything out of my kitchen drawers and then kind of forgot about it. I had to emotionally distance myself from the whole mouse/kitchen situation. It was just too much.

That night, I woke up because so help me Oprah, someone broke into our house. I could hear him (or her – no judging) sneaking around downstairs. I woke my exhausted, finally asleep husband and we both remained in bed, stiff with adrenaline coursing through our veins. I wondered when My Guy was going to grab his softball bat and if I shouldn’t just go ahead and call 911.

After a minute of listening, My Guy said, “It’s the mousetrap.” Then, he rolled over and went back to sleep.

But, considering that I was then unable to sleep for the next three hours, I can say definitively that we were not burgled. And examining the trap the next day showed … no mouse. Just tiny little claw marks in the trap’s peanut butter.

Basically, the mouse had gotten a little bit trapped, made a whole lotta noise, and then escaped.

I set the trap again.

That night, no noises. Or maybe we were burgled but the dudes (or dudettes – no judging) were really quiet and with the house in such disarray, I didn’t notice anything missing.

But turns out, there were no noises because the trap did its job. Inside my bread drawer was a dead mouse approximately the size of a Honda. 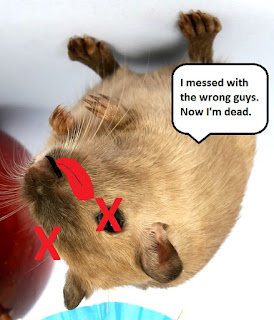 That was the good news. The bad news was that I was home alone.

See, the trouble with the really nice traps from the farm and home is that you can only get them at the farm and home. And there isn’t a farm and home anywhere near me because I’m a fool and moved to the city, away from such places. These were hardcore traps, not the kind that you could just throw away without a second thought. There were traps of country folk. Folk who could kill a snake with a shovel and not think twice. (Hi, Melissa!)

I thought twice. I thought three and four times about what I was going to do about that dead mouse.

Then, I realized it was Saturday. My Guy was just out gallivanting around. He would be home within an hour. An hour wasn’t enough time for there to be a noticeable increase in dead-mouse decay.

The carcass could wait. I could delegate. Because I am a leader and a strong woman and in no way would need to turn in my feminism membership card simply because I asked my life partner to complete a specific task in our home.

And so it was.

He made the Honda-sized mouse go away. I let scalding water run over the empty but certainly reusable trap. Order was restored.

In case you’re wondering, no, I’m not going to become an exterminator.

Jesus was cold in the manger, but He was chill.