Why I live in the basement.

When My Guy and I bought our house, we took one look at the kitchen and promptly announced that we couldn’t possssssibly live with it.

That was five and a half years ago. We’ve totally been living with it.

We weren’t being pretty, pretty princesses – someone had taken a hammer to the countertops. They were cracked and big chunks were missing. The cabinets had once been nice but had been beaten up. And the entire space was dark and tiny and not maximized.

So, the kitchen we couldn’t possibly live with? We’ve been living with.

Until we were just done living with it and dug all the loose change out of the sofa cushions and started a remodel.

Now, God love our contractor. He lives in our neighborhood and is familiar with these old houses. And the subs are clearly artisans and doing stuff right.

It’s been 10 days. The house is filled with dust. Big Doodle is losing his mind and chewing himself some new hotspots as stress relief. I’m starting to feel like a troll who never leaves the basement. Because the basement is the least dusty area of the house, and I work from home.

Sounds swell, right? Join me on a photographic journey of remodeling a kitchen …

The before. Yeah, those aren’t bad looking cabinets at first glance. They will be great repurposed in the laundry room. And yes, that’s as bright as the room ever got. I took this photo when the afternoon sun was at its brightest. No small-print cookbooks in use here! 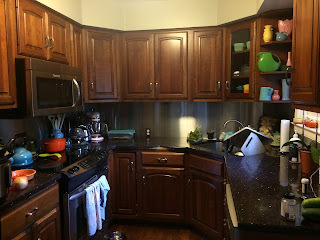 This is the entire kitchen. Envision two adults attempting to cook together while an 80-pound labradoodle does his best throw rug impersonation. Good times!

This extreme close-up shows the worst of the broken countertop. Why yes, yes that is a jagged faux-granite top. Why yes, yes I have sliced my hand open on it more times than I can count. Hurray!

So, My Guy and I emptied all the cabinets, which was something because I had crammed stuff in every possible space. And then we moved the fridge in preparation for demo. Of course, the best place to put the fridge just happened to be right next to the front door. 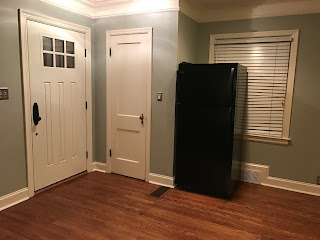 I thought this was mega-tacky until I realized that it means I can offer my guests a cold beverage the very second they arrive. You know, with all the entertaining that one does during a major remodel.
So, demo day came. And at the end, the kitchen looked like this. 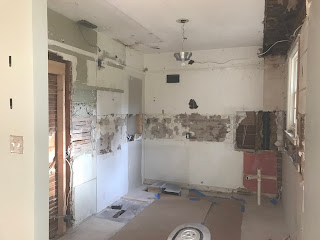 My mom said it’s the minimalist look and is totally in. That kind of squelched my panic. Kind of.
So, now the different dudes are doing their different flavors of magic. The plumbers have been here, and the electricians were here for two and a half days (!Viva la old house wiring!). Everything is dusty. I’m still in the basement.
I was astounded and a little bit jealous that the electricians can just write their to-do list on the wall in Sharpie. Wouldn’t that be pretty fun? 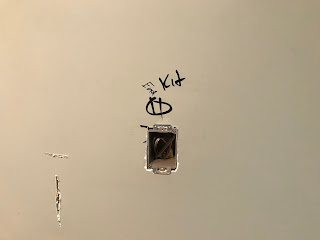 I decided a little vandalism was OK. After all, it’s my house. 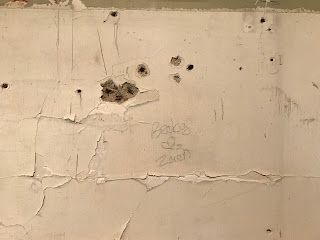 It’s my house … and have I mentioned the dust? We’ve mopped like three times, which is kind of like slamming your head against the wall for no good reason. So, that’s a bummer. But Big Doodle is really enjoying the paper that’s down to protect the floors. 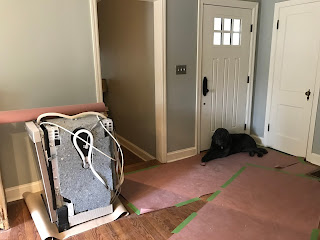 Yeah, that’s totally our dishwasher. Out in the open. It’s the latest style.
Big Doodle is also enjoying lounging in our makeshift kitchen area in the basement. 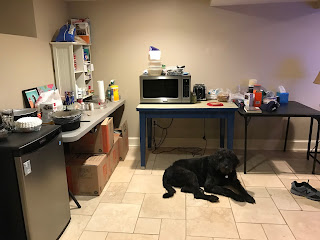 It’s not a bad set up, really. I was really proud of myself for using the little shelf thing as a mini pantry. It’s about the same amount of food storage that we had in our old kitchen, actually. But you might notice that something is missing.
Our sink is in the unfinished part of the basement. And yes, I have logged approximately 43,729 steps between the card-table kitchen and the sink just in the last three days. 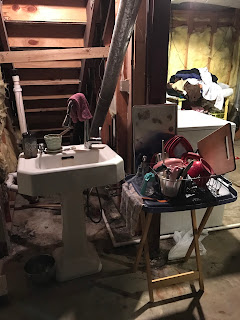 I’m thankful we have a sink in our basement. It was my birthday gift a few years ago because I am a wild and crazy birthday girl. The challenge now is that the back wall of the kitchen is open directly above the sink. (See also: unfinished area of basement.) So, every time the worker dudes drill or pull out more plaster, crap comes raining down into the basement, to the sink area.
Yes, we’re using a lot of paper plates. I figured Mother Nature would understand. Uh … I’m conserving water by not washing plastic dishes every time somebody uses a drill. You’re welcome!
So, all this to say … don’t remodel your kitchen. Or, if you do? Go on vacation while it’s happening. Or, just make sure you have a super luxurious basement because you will be living there. Like a hermit. A hermit who has to wear a bra alllllll the time because people are constantly in and out of the house. Clearly, no one has ever faced such a terrible hardship.
If you wanted to share stories of remodeling triumph, that would be cool. Right now, there is no light at the end of the tunnel.
October 13, 2016 by Becky Brown
Previous Post Next Post

Someday, I’ll be the lady who insists you view all 4,278 of my vacation slides.

And did I mention my giant zit?

There are no adults. It’s just us!