The joke is that I had to marry my husband because I fell in love with his dog.

It’s funny because it’s true. Or partly true. I love my husband. But that gigantic man-dog labradoodle of his? Well, we fell hard and fast.

On our very first date, My Guy and I met to walk his two labradoodles. I walked Big Doodle and I was astounded by this Hyundai-sized furball. He was a perfect gentleman.

A few months later and our relationship had progressed to such a point that one night when I stopped by My Guy’s house, Big Doodle did what can only be described as “losing his shit.” He was so excited to see me that he jumped up and down, squealed, brushed up against me, and cried. I ended up sitting on the floor of the kitchen while my 80-pound loverboy sat in my lap and licked my hair, still squealing.

Whenever I’m feeling sad, I think about that. Sure, I might be (fill in the blank with horrible thing du jour), but a dog loves me that much. And I love him right back.

It’s hard to see someone you love decline. But My Guy and I have been doing just that for a while now. Big Doodle was diagnosed with bladder cancer in the summer of 2015. And he hasn’t had any hip sockets to speak of for, well, a long time. But always, we had a boy made of fur and love.

A few weeks ago, he stopped being able to go up and down stairs. My Guy and I took turns sleeping in the guest room with our boy so he could more easily go outside a few times a night. 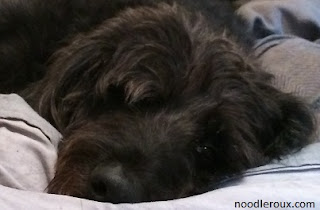 It was the kind of “new normal” that could last a few days or a few months. Except that Big Doodle decided it was done. He failed quickly and died a few days ago.

He was bright-eyed and full of joy until the end. Our hearts hurt, but we know it was time.

Lil’ Frankfurter gets it and is understandably needy. No one is going to the bathroom without his supervision right now – he refuses to be alone.

It’s a bittersweet time. I feel privileged and blessed to have had such an amazing dog in my life. He was the special friend of many neighborhood kids and was known to lick a random baby in a stroller while we were out for a walk. I have uttered the words, “Can my dog see your baby?” because he was so drawn to small folks.

Our vet said Big Doodle was quite literally the nicest dog she’d ever met.

I’m glad he’s at rest. But my heart is a little bit broken. I’m so thankful I got to be his mom. 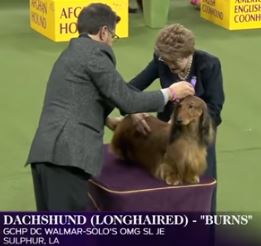 The Westminster Dog Show is dead to me.

I ain’t hatin’ on no fruit.