We’ve been talking a lot about our Miss Universe-esque cultural heritage costumes. Don’t forget to leave a comment describing the costume that best represents your peoples. You could win fabulous prizes!
Lil’ Frankfurter initially thought he would wear a black and white striped prison uniform for his costume. It would reflect both his puppy prison background and the tyrannical rule of yours truly. However, he has since decided that he doesn’t want to be negative, so he would just wear a costume made entirely of tennis balls.
Foxie Doxie was adamant from the get-go about his costume. He would proudly represent the doxie peoples by wearing a possum pelt. The skanky, hairless tail would be curled up on his head like a crown. And Foxie’s chest would be puffed out like the great hunter he is.
As for me? Well, my costume of 21-year-old t-shirt and dog-hair-encrusted sweatpants has had a few additions.
First? I will be carrying my new life partner, Ione the iPhone. Yes. I got an iPhone. I don’t know how to use it at all, but she has a pink case and is lovely. She’s named after my great-aunt.
Secondly, I will have to hike up the left pant leg of those nasty sweatpants to show off a little home maintenance experiment gone awry.
If you are power washing the 17 layers of paint off of your front stoop, because it’s stupid to paint a front stoop because the paint just peels anyway? And you end up with dirt and paint flakes all over your body?
Umm? Fight the temptation to take the water-shooting device in your hand and use it to rinse off your legs. Remember: you are holding a power washer. And yeah, it’s powerful. And yeah, it will hurt. 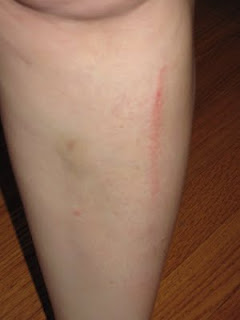 Yeah, I got your sexy right here.
The third addition to my cultural heritage costume is courtesy of Foxie Doxie, who has been spending a lot of time in the backyard this weekend. Tonight, I finally figured out what was so interesting along the back fence line.
Foxie came in and ran past me, ignoring my demands to wipe his paws. From across the room, he shot me a look that said, “Oh, damn. I’m not going to get away with this, am I?”
It was then that I noticed the grey fur sticking out of the side of his mouth.
Now, the swell thing about having small dogs is that you can just pick them up and force them to do your bidding. This is how I managed to get Foxie and a roll of paper towels out on the deck in a matter of seconds. However, the entire time I was yelling, “I can’t believe you brought that into MY HOUSE! What the FUCK were you thinking? Oh, HELL no!”
Because I was channeling the trailer from that Beyonce movie where she’s all, “Oh, Ali Larter, you did NOT come into my house and touch my CHILD!”
Me and Beyonce? That’s how we roll.
So, I took a paper towel and used it to fish the treasure out of Foxie’s mouth. It was a tiny baby bunny … well, half a baby bunny. Let’s just leave it at that.
I promptly dumped Foxie into his kennel. And I wrapped the carcass in the paper towel, then double bagged it in two Target bags. Having learned my lesson last time about how rotting varmint can pretty much ruin your garage, and also thinking about a show I saw about bears recently, I hung the double-bagged bunny from a hook on my deck, next to the wind chime.
I’ll take it to a dumpster tomorrow. But for tonight? My cultural heritage costume includes a Target bag swinging about saucily.
August 31, 2009 by Becky Brown
Previous Post Next Post

One downside to the English degree.

The paparazzi’s flash is blinding