I’m just gonna come out and say it.

Corporate Behemoth is stressing me out.

Along with the cushion destruction, there’s also Lil’ Frank’s proven ability to chew on his blankets and the fact that he’s gone through six water dishes in the last year. Water dishes of hard plastic. He gets mad and breaks the brackets that hold them to the kennel. 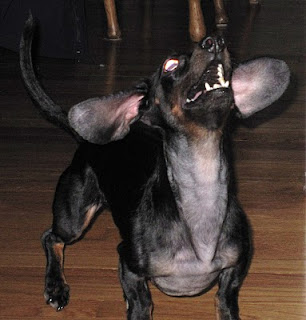 Yes, my dog looks like a rabid hound from the lowest depths of Dante’s Inferno. Yes, my dog weighs seven pounds. Yes, that’s a lot of destruction per pound of dachshund.

So, I cleaned up the fiberfill and inspected the latest water dish. Then, I realized that the kid is sending me a message: he’s just annoyed with his daily surroundings and routine. He needs more enrichment.

I’m now having visions of really sticking it to Corporate Behemoth. I’ll chew up all the papers in my cube and leave the frustration confetti everywhere. I’ll break my office chair and knock my monitor off the desk. And then, when I’m reprimanded? I’ll follow Lil’ Frank’s lead and look innocent and adorable.