This weekend, I got together with two of my college roommates. It’s good to have friends who know all about you and like you anyway.

We talked. And ate. And saw Mamma Mia, featuring the guy who played Jack on Days of Our Lives back in the day when all activity in the sorority house ceased from 12:30 to 1:30. It was back when Marlena was possessed by that demon and was levitating and stuff. Good times.

But back to the food.

Saturday wasn’t that bad. I ate a veggie burger for lunch and a Greek salad for dinner. But Sunday?

Well, Sunday, our hostess with the mostest made pancakes and bacon.

Mmm, bacon. I realized that night that yum! My pajamas smelled like bacon. And who doesn’t love to dream about bacon?

But just how much do you love bacon? Because Sunday afternoon, in lieu of lunch, we traversed to an old-time ice cream parlor, where we, uh, did enough damage to make any Jenny Craig consultant faint. 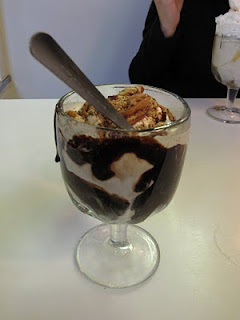 But … there was a piece of bacon on the floor. Just left there. So we asked ourselves: just how much do you love bacon? Do you love bacon so much that you’d eat floor bacon? Maybe floor bacon is a specialty in some eastern European country where everybody only has one eyebrow. It could be delicious. You just don’t know. 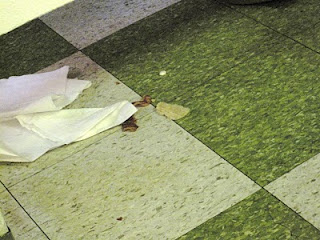 And … we still don’t know. Our love of bacon, sadly, has its limits. As do my attempting-not-to-get-caught photography skills. Because it’s rude to take photos of floor bacon.

We rounded out Sunday with fried chicken. And yes, I did Shred with Jillian Michaels today. I probably should have done it three times instead of once. I realized this weekend that my days of eating whatever and it all coming out in the wash, so to speak, are over.

Now? I think I’m safely a member of the Eat It / Work It Off Tribe.

It kind of sucks.

I also think I’m a member of the Sleep On An Air Mattress / See Your Chiropractor Daily For A Week Tribe.

These tribes? Not as fun as the Greek Letter Tribe where I met my partners in crime. Thus far, there are no mystery dates, no t-shirts for every event … but also no hangovers. And since I’ve been a member of the Sunscreen Every Freakin’ Day Tribe since college, things aren’t looking too bad.

But working off the sundae and the bacon and the fried chicken? I’m also a member of the Jillian Michaels Is Trying To Kill Me Tribe.

I have a placemat for my VCR. If I still had a VCR.

The life of the party.