This weekend, it finally happened. 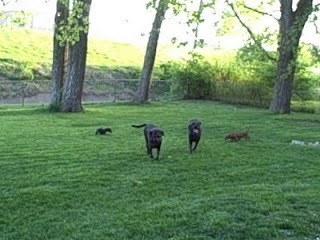 Lil’ Frank would like me to point out that while he’s the size of a ferret, those seven pounds are pure muscle.

So, I took the doxies over to My Guy’s house. His dogs were in the back yard. There was sniffing through the fence. Then? Then, I unleashed Doxie Madness upon Labradoodle Nation.

There was general sniffing. Lil’ Frank was terrified of Bigger Lab and scuttled around, trying to avoid him. And then? 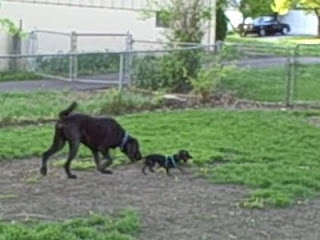 Then, Foxie Doxie took a dump. Lil’ Frank – despite the slow-motion movements and screams of “Noooooo …” by yours truly and My Guy – ate it in one disgusting gulp.

So, My Guy and I made mental notes not to let Lil’ Frank kiss us. And then we all played tennis ball. The end. 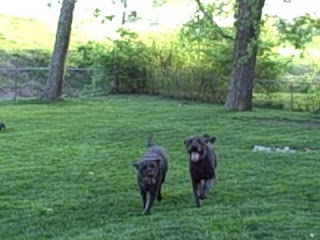 OK, not quite. Foxie secured the perimeter nonstop, which is another way of saying that in usual Foxie style, he ignored the other dogs since no one happened to be on leashes. Instead, he just trotted along the fence.

And Lil’ Frank? Well, he played ball with Big Lab and Bigger Lab. It was just like watching a little kid try to play with big kids, except minus the frustration. Lil’ Frank never got the ball, but he didn’t seem to care. He just ran alongside his labradoodle companions and managed not to get stomped. We tried a two-ball system, where one ball was for the big kids and a second ball was thrown a moment later for Lil’ Frank, and it worked for a while. But mostly, he was interested in being a part of the pack. 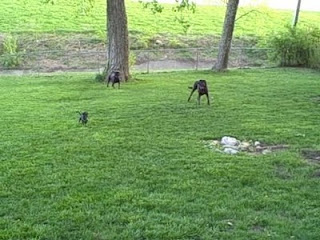 As for My Guy and me? Well, we’ve been seeing each other for almost a year, so it was about damn time the kids met. We decided it was a wild success – nobody got bit, nobody got rabies, and everybody got really, really tired.

Seventeen things I’ve learned from having a puppy for lo these six days.

In case you were wondering.