So, it’s been approximately 27 years since I’ve posted. In that time, My Guy and I:

The end.
When you actually list your house, it’s rather anti-climatic. I mean, here you’ve been slaving away, doing all those little projects you always intended to do but didn’t because, well, you have a life? And cleaning? And trying to act like Everything Is Fine Please Don’t Feel the Need to Mark Your Territory so your dogs don’t, you know, mark their territory?
And then your friend the realtor comes over, and you take pictures and hang out at the dining room table for an hour and poof! Your house is on the market. There’s no trumpet sounding, no confetti to celebrate that yahoo! You did it! But that’s OK, as confetti would just be one more damned thing I’d have to clean up.
I guess the most remarkable thing about the last week – other than the fact that I went five days without washing my hair and actually got to the point where I had smelled bad for so long that I ceased to smell myself? Other than that?
Well, Foxie Doxie and Lil’ Frankfurter boarded at the vet over the weekend. And they appeared to have a great time. But a little something happened when we got home that made me think that Lil’ Frank, my 7-pound stud, was a little not right during his time away from home. Something was a bit irregular.
He did this within five minutes of getting home. 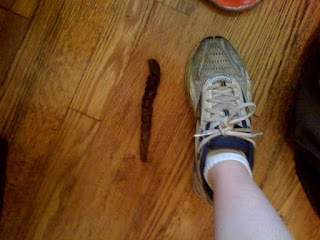 I know it’s gross, but dude. I had to capture this. I wear a size 6.5 shoe. That’s a big-ass poo. I think he held it all weekend. I had no idea he was one of those guys who can only do the doo at home.
And that? Has been my week.
July 9, 2010 by Becky Brown
Previous Post Next Post

Why adulthood needs a how-to manual.

At least I don’t have to teach them long division.