The Good.
The new house is starting to come together. We’ve decided to postpone rehabbing the second floor, which means we can afford to refinish the floors on the main floor. Which we are getting for cheap from a reputable source. !Viva la hardwoods!
The Bad.
Every single surface in the new house requires extensive cleaning, two coats of Kilz, and three coats of paint.
My hands are devoid of skin and smell like PineSol. My dreams of being a hand model are completely dashed.
Everybody’s getting a little crotchety, especially the dogs.
The Ugly.
We’re all trying to maintain a sense of home in the upheaval, even with the labradoodles at my house and realizing that random stuff – like cooking spray and paper towels – are at Not The House You’re Currently At.
Yes, I know that ended with a preposition. And I don’t care.
We’re all trying to keep it together, but Foxie Doxie expressed his frustrations in a poignant way last night.
He peed on the bed.
I believe in Dogspeak, this means, “This is my bed, bitches! Mine!”
So, yeah. It ain’t pretty. But we keep on keepin’ on.
The Glorious.
While civil unrest rules at Casa de Cha Cha? Krampus the Christmas Frog is living it up.
He celebrated the Iowa Hawkeye bowl win. 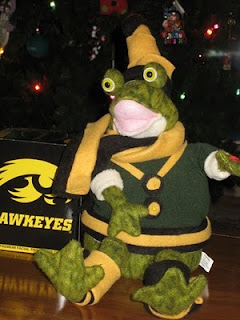 And he’s been chillin’ with some new friends. 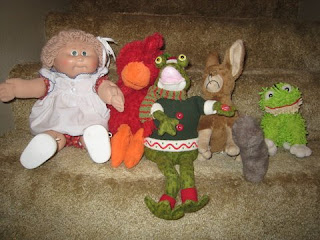 I also understand that he and his posse survived a shih tzu attack. Don’t worry – Krampus lives to ribbit another day! 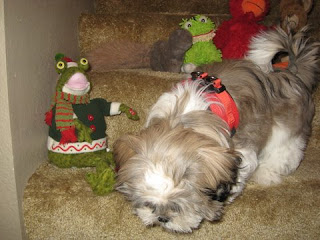 All images courtesy of my mama. Who is awesome. Obviously.
January 13, 2011 by Becky Brown
Previous Post Next Post

Maybe we should get a doggie door.

How can we be lovers if we can’t be friends?