I’m never going to be a spokesmodel at this rate.

My Guy and I had a date tonight. High rollers that we are, we went to Pei Wei and then a movie.

Well, we also went to Home Depot, because we had time before the movie. Because you know you’re married with a fixer-upper when, instead of grabbing a drink before the movie, you grab a dimmer switch.

We saw Sleepwalk With Me, which was quite good.

But the point of all of this is … it was date night. Today, I walked the dogs and worked around the house. Notice that I did not actually bathe.

So, in preparation for date night, I decided to go all out. At about 5 p.m., I showered. I slapped on some pretty-smelling lotion. And I decided to dress like a girl.

Now, in the time I’ve been unemployed, I’ve basically been wearing workout clothes 24/7. Not because I’m working out, but because I am lazy. The only times I’ve worn mascara since the beginning of August were the handful of times I met with recruiters. Otherwise? So not worth the effort.

But for date night, on a night when my legs hurt from running about and we were headed to fancypants places like Pei Wei and the fine-arts theatre? I attempted to pull out all the stops.

I tried. I really did.

I ended up wearing a feminine, navy skirt (good start!). And a gold Iowa Hawkeyes t-shirt (umm … OK?). And a green cardigan that I got off the Target clearance rack in 2005 (really?).

I wore earrings. And a little lip gloss. And that was as dressed up as I could manage.

My Guy told me I looked pretty. I believe this is code for, “My prayers are answered! You changed out of those running shorts! Hallelujah!”

Now, part of me likes to believe that I’m getting back to basics, and getting comfortable in my own skin, and that my new habit of going, well, everywhere without brushing my hair is just me being free.

The other part of me thinks that I’m going to be in a world of hurt in a week when I have to go back to work … in an office where jeans aren’t allowed, for God’s sake. I’m also sort of wondering what happened to me liking to wear jewelry and dress like a girl. It used to be fun. Now, it just seems like work. 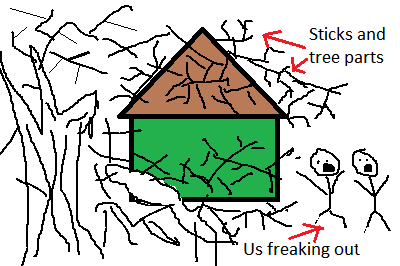 All I want for Christmas is not to barf.