I have a 7-pound dachshund.

I also have an 88-pound labradoodle. 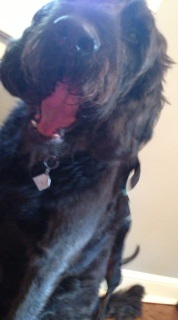 This is a picture of said doxie molesting said doodle.

This has been going on all day. All day.

Seriously. I pull Lil’ Frank off Big Doodle, roll him on his back to show that I’m the alpha, then let him go once he looks appropriately contrite. Then, Frank hops back up on Big Doodle all over again.

At first, they were under a table and I thought they were cuddling. Then I discovered that it was a very special kind of cuddling. Big Doodle is so chill that he doesn’t even care. That, and given Lil’ Frank’s size, the doodle probably thinks it’s just a piece of paper, or maybe a fly.

I would feel sorry for Big Doodle, except that he keeps walking over, getting right in my face, and burping. Burping the juicy burps that only come when one has been dining in the yard. 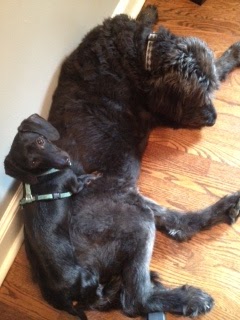 Nothing to see here. Just some dudes, chillin’.

The truth is that young Frank just will not be deterred. Much like Starship, nothin’s gonna stop him now.

When stress explodes, scars you, and frightens young children.

There’s no new sheriff in town.