1. If you ever need to restain your deck, shell out the whopping seven American dollars for a paint pad. It’s sort of like a Swiffer, but you use it to effortlessly spread stain on your deck so that your deck doesn’t look homeless. Today was so hot that even my sweat was sweating, but the deck? She was cheap and easy.
2. Mike Holmes is officially the sexiest man alive. 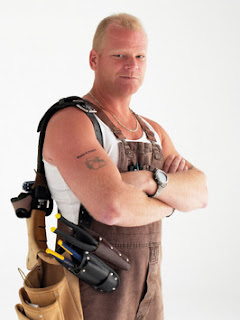 My mom already knew this.
There’s nothing like attempting your own home improvement projects from hell to make you appreciate a decent contractor. I love his show. And I will say … My Guy had a certain Holmes on Homes aura about him last night as we demoed some drywall. Something about the way he wielded that hammer and crowbar just made me see him in a whole new light. Or maybe it was just the dust.
Did you know that Mike Holmes started a foundation that gives scholarships to people who want to learn construction trades? Stop being so damned sexy!
3. Lil’ Frankfurter is my hero. Realizing that his mama is covered in way too many bug bites from way too much time working outside, he just ate a mosquito that had landed on my arm. That’s love, people. Big love coming from a tiny dog.
Image courtesy of hgtv.com.
June 26, 2010 by Becky Brown
Previous Post Next Post

All Walter does is win.