Barbie? That bitch has everything.

It was another hectic weekend of house stuff. Garages were cleaned. Decks were stained. Ceilings were painted. Mental breakdowns were had.

And through it all, Foxie Doxie kept his usual vigil in the backyard. He secures the perimeter, keeping us safe from all manner of squirrels, chipmunks, and bunnies.

But yesterday? He met a new foe.

Foxie found a turtle. And had no idea what to do with it. So, he stood over it, barking. When My Guy and I went outside, Foxie looked up with relief. Finally! People with thumbs who should be knowledgeable in the management of such critters!

My Guy picked up the turtle and put it on the other side of the fence, into the yard of a neighbor who doesn’t have dogs. And my sweet boyfriend smiled as he came back into the house.

“I’ve never told you about Beep Beep? Oh, man! He was my pet turtle!”

Get this: as a young lad of about 8 years old, My Guy found a turtle in the backyard. He named it Beep Beep and painted “BEEP” on the critter’s back with red nail polish.

Beep Beep lived in the yard and My Guy and his siblings would feed it lettuce. When it was really hot, My Guy obsessed about setting water out for Beep Beep. But in the heat of the summer? My Guy and his sisters put Beep Beep in the Barbie Dream Pool. 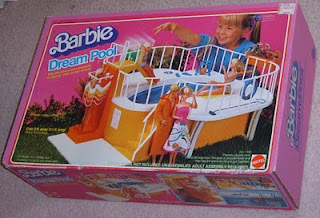 It was at this point in the telling of the tale that I morphed from delighted to insanely jealous.

Not only did he have a turtle, but his sister had the Barbie Dream Pool! It came with a shower and a slide. And only the most awesomest Barbie Dream Pool ever also had a real, live turtle swimming in it.

Color me green with eeeeeeeenvy. Although I will say that my Malibu Ken did have the sexy hooded robe sported on the box of the Barbie Dream Pool. Oh, yeah.

So, Beep Beep would turn up every year for a summer of lettuce and chillin’ by the pool. Until one year when Beep Beep didn’t show up and My Guy’s mom convinced the kids that he was just living in a neighbor’s yard … sort of the turtle equivalent of a nice big farm with plenty of room to run.

This part of the story caused My Guy to droop a bit. But maybe the neighbors had the Barbie Dream House.

I really need my own show on HGTV.

Three people who change my life every day.*

Oh, teevee. No one loves me like you do.